So when he had the chance to work with an artist during one of his many stays at Akron Children’s Hospital, it’s only fitting that he decided to paint a portrait of his favorite stuffed lion.

Ethan’s piece is one of 34 works of art that went on display in the Gallery of Strength art show at Akron Children’s Hospital’s Emily Cooper Welty Expressive Therapy Center.

Each painting, drawing and digital artwork in the one-day art show was made by a patient at Children’s.

For Ethan, painting allows him to be a normal kid, not a cancer patient who’s often trapped in a hospital room.

“Maybe next time I’m in the hospital we can do a puppy or panda,” Ethan said enthusiastically. “Maybe I might bring both of them when I come into the hospital.” 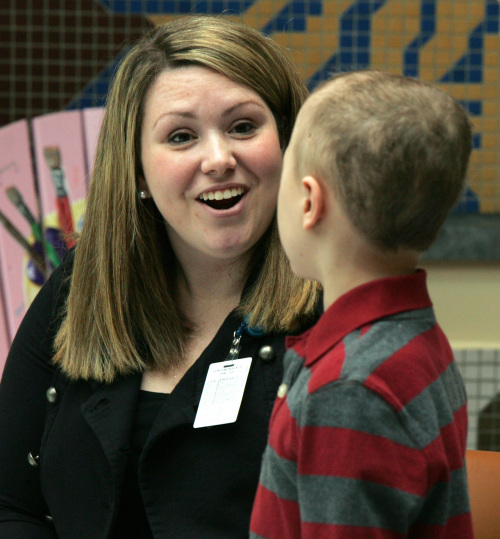 Emily Dennis (right), artist-in-residence at Akron Children’s Hospital, chats with patient and artist Ethan Puhalsky, 7, about the artwork he created for a show at the hospital in Akron, Ohio. (Akron Beacon Journal/MCT)
“He has no problems coming to the hospital because of things like this,” added his father, Brian Puhalsky. “It’s really a great program for them, just to break the days up.”

The Gallery of Strength is the culmination of a yearlong, $16,000 grant from the Livestrong Foundation that allowed Kent State University doctoral student Emily Dennis, 27, of Akron, Ohio, to serve as the hospital’s artist-in-residence.

The hospital competed in a national online voting contest to earn the financial support from the nonprofit group, created by the Lance Armstrong Foundation to help people affected by cancer.

During the past year, Dennis spent nine hours a week helping patients express themselves by drawing, painting and creating artwork on iPads.

“The goal was to bring the arts to health care and introduce the arts,” she said.

Dennis became interested in art therapy nine years ago when her father was battling cancer.

“I was coping with that by drawing,” she said. “That’s how I expressed myself. It was an outlet for me. It was taking all that anxiety and putting it into a visual form and getting it out of my head.”

Her personal experience encouraged her to earn a master’s degree in art therapy. She’s now pursuing a doctoral degree in counseling.

Although the goal of the yearlong art program at Children’s wasn’t necessarily therapeutic, “it’s hard to deny there’s therapy going on,” she said.

At first glance, for instance, the whimsical creatures with toothy grins in one of the paintings displayed in the Gallery of Strength appear lighthearted and fun.

But for the artist who created the piece, Dennis said, the colorful beasts represent personal monsters: serious, frightening medical problems.

“These were her monsters and these were what she was dealing with,” Dennis said. “The artwork was her way of externalizing these internal fears.”

As Dennis’ year at the hospital comes to an end, she wanted to share the young artists’ creations by organizing a show.

“I was overwhelmed by the talent and creativity of the kids here and wanted to celebrate them,” she said.

The show has received support from the Straughn Family Foundation and Pat Catan’s Craft Centers, which provided frames.

The Livestrong Foundation has requested several pieces from the Gallery of Strength to display at the nonprofit’s headquarters in Austin, Texas, Dennis said. The rest of the framed pieces will be returned to the young artists or their families.