He can’t speak a word of Korean, and knows little about this country, but former Uzbekistan boxing coach Mars Kuchkarov says his current goal is to take the Korean national boxers to the London 2012 Olympics.

His name may not be familiar to most people here, but the former Uzbekistani national team coach is one of the biggest names in boxing.

Now, 55, Kuchkarov has established himself over the past two decades as a master of boxing after winning numerous titles, including the 2000 Sydney gold medal.

The Korean Boxing Federation last month appointed Kuchkarov as the national boxing team coach. His appointment came as a bit of a surprise, as the Korean boxing team has never had a foreign coach before.

“I was very happy to take this job, because I know the Korean team has very good guys,” Kuchkarov told The Korea Herald in strongly accented English.

He first came to Korea earlier last year after taking the helm of Pohang Poseidons, the professional boxing club in the World Series of Boxing.

Before coming to Korea, Kuchkarov was involved with several teams, including Uzbekistan, China and also Taiwan.

He said his aim is not only to help the Korean team win a medal at the upcoming Summer Olympics, but also to help revive the popularity of boxing here.

“I know football and baseball are very popular in Korea, but boxing is not,” he said. 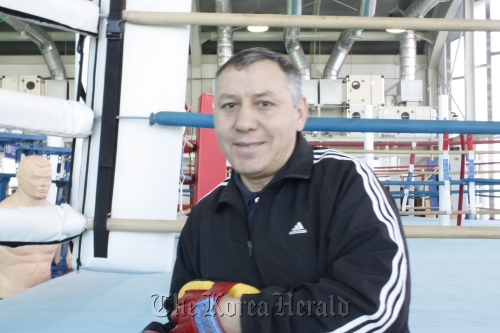 Newly appointed Korean boxing team coach Mars Kuchkarov. (Oh Kyu-wook/The Korea Herald)
Boxing used to be one of the most popular sports here, gathering everybody in front of TV sets when a boxing match was on. But the popularity has declined rapidly since the introduction of professional baseball and also football league in the early 1980s.

He, however, believes the London Olympics can be a turning point for Korean boxing.

“Everybody will watch Olympics. If we can win a gold medal in boxing, more people will follow boxing,” he said.

Yet his goal seems a daunting task, considering the current level of the Korean national team: Korea has not won a gold medal since the 1988 Seoul Olympics.

Kuchkarov, however, said he was eager to take on the mission.

“Every boxer has a chance in Olympics, and we have a chance too,” he added.

“The (Korean boxers’) endurance is very good and also they respect coaches, which is very important in boxing.”

He noted that, in particular, Korean light flyweight champion Shin Jong-hun has a real chance to win a gold medal in London this summer.

Shin first made his name in the world boxing by winning the 2009 World Amateur Boxing Championship, his first ever international competition.

“He is a very good boxer. He smiles every time, he wants to train. I know because he really likes boxing,” Kuchkarov said.

There will be 10 men’s boxing weight classes at London 2012 and, for the first time, three women’s events.

So far, however, Korea has secured only one Olympic berth: the 23-year-old Shin, who is currently the No. 1 in men’s 49 kg, automatically qualified for the London Games.

Kuchkarov admits he has no time to waste before the Asian Qualifying event in April in Kazakhstan, where 56 boxers will qualify.

“I have plans for helping them improve tactical and technical abilities,” he said.

But the most important thing, he added, is the boxers should have self-confidence.

“If we want to win, we must believe ourselves, it’s very important in boxing.”

Asked whether Korea can win a gold medal in boxing this time, he added: “God only knows, but we know we must be training hard, very hard.”