Hyundai, set to launch the two-door midsize sedan in Korea and major overseas markets, picked the U.S. market as its first target.

“The Avante Coupe is equipped with a 1.8-liter engine with 148-horsepower,” the company said Thursday. “It will hit showrooms in the U.S. during the first half of the year.” 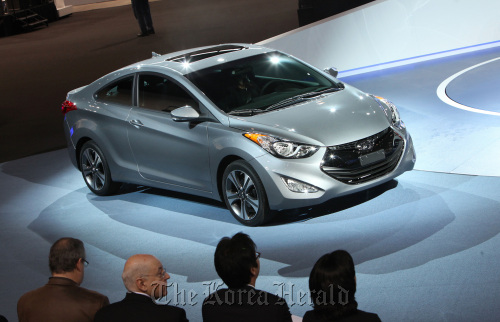 Hyundai Motor’s Avante Coupe. (Hyundai Motor)
In addition, the carmaker introduced the i30 hatchback, dubbed the Elantra GT in the U.S., at the exhibition for the first time in the North American market.

The five-door hatchback, the latest in Hyundai’s Avante (Elantra) lineup, is expected to hit dealerships this summer. It was named the 2012 North American Car of the Year.

Other popular Hyundai vehicles, such as the Equus, the Genesis, the Sonata hybrid and the Veloster, are also exhibited at the motor show.

It is powered with a 2.0-liter turbo engine with 250-horsepower. The model is mated with a six-speed manual transmission.