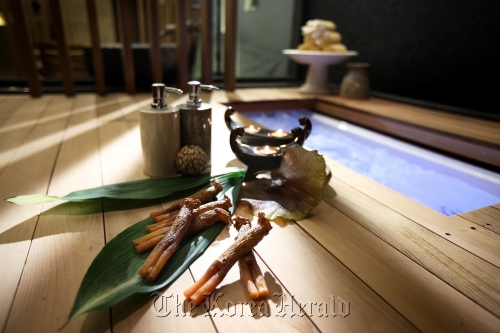 
A housewife in her early 50s, Kim Jung-won has been using Sulwhasoo’s Snowise UV Protection Cream ever since she first spotted it at a local shop about 10 years ago. Though she has always been a fan of Korean cosmetics, the cosmetic brand’s oriental ingredients especially attracted her.

“Who would know better about Koreans’ skin, Koreans or foreigners? From what I have used, cosmetic products made in Korea were milder and better comforted my skin than those made by foreign companies. Moreover, Koreans are known to be dexterous so I believe in the quality,” said Kim, adding that the oriental herbal scent is inoffensive.

“If anything, the scent makes me feel more detoxified,” she said.

The nation’s major cosmetics companies such as Amore Pacific, LG Household & Healthcare, Koreana and latecomers KT&G and Woongjin Coway have all rolled out herbal cosmetic products. From basic skin toner and lotion to even shampoo and hair conditioner, such products are leading their sales.

Sulwhasoo’s best selling product First Care Serum (Sulwhasoo)
“The difference between cosmetics products made of oriental herbs and regular cosmetics is the ingredients which make the products safer and friendlier to the skin. Even those with very sensitive skin will find the product safe,” said Irene Kim, a PR official for Sulwhasoo.

Amore Pacific’s Sulwhasoo is the leading brand in the herbal cosmetics market. Launched in 1997, it now accounts for about 30 percent of Amore Pacific’s total sales. Sulwhasoo marked over 700 billion won worth of sales in 2010 and some 1.7 million bottles of its best seller, First Care Serum, are sold every year.

LG Household & Healthcare’s brand Whoo, the runner-up in the market, marks about 380 billion won worth of sales every year. Woongjin Coway and KGC Life&gin joined in on the trend and launched their oriental herb cosmetic brands Allvit and Donginbi, respectively, last year.

“With our know-how about red ginseng, we are ready to catch up with Sulwhasoo,” said Kim Sang-beom, head of KGC Life&gin at a press conference held in October. KGC Life&gin is an affiliate of KT&G which owns Cheong Kwan Jang, the nation’s leading red ginseng brand.

Cheong Kwan Jang also opened spa G, a red ginseng spa, in September in Daechi-dong, southern Seoul. It is gaining popularity among foreign tourists, especially Japanese and Chinese. In the high travel seasons, about 70 to 80 percent of the visitors are tourists from Asian countries.

Foreigners are a big and growing clientele for Korean cosmetic goods made of oriental herbs. Asian tourists armed with shopping bags are easily spotted in Myeong-dong, the popular shopping district in central Seoul, crowded in front of Korean brand cosmetics stores. Tourists from China, especially, practically sweep up everything in the shop, according to market insiders.

“Our main target is women aged between 35 and 45. But recently, younger women aged between 20 and 35, who are highly interested in moisturizing and whitening lines, are growing as a new clientele. We expect a two-digit growth of the oriental herbal cosmetics market as the clientele is expanding age-wise and also overseas,” said Irene Kim.