Winemakers in southeast Czech Republic, waiting for a dip in temperatures during an unusually warm winter, finally got the deep chill they needed to harvest grapes for the most prestigious part of their business ― ice wine.

The sense of relief was palpable after temperatures finally dropped to minus 7 Celsius allowing grapes to be picked for the sweet, expensive wine. Strict government regulations are in place saying the grapes for ice wine can’t be picked until the mercury drops to that level.

“Thanks God! It’s minus 13 (Celsius) today,’’ Antonin Zatloukal said with relief at the Three Oaks vineyard at dawn on a recent frigid February day with a biting wind. The deputy director of the Znovin Znojmo winery was there to oversee the harvest of around 10 metric tons of Pinot Noir and Traminer grapes.

“We never picked the grapes so late before,’’ Zatloukal said. “Previously, we always managed to do it before the year’s end.’’

When the grapes are harvested, they are immediately taken for pressing. With the water inside them frozen, the result of the pressing is a highly concentrated juice, rich in sugar and acids, which then undergoes fermentation before it becomes ice wine. 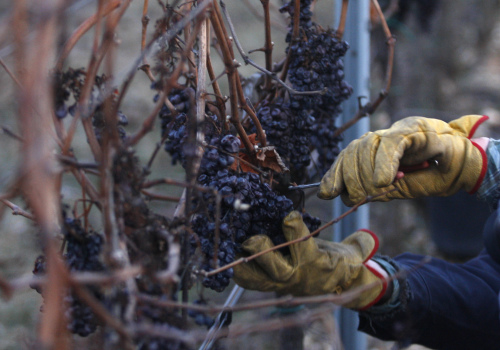 A man picks grapes of Pinot Noir from a vineyard near the village of Stosikovice na Louce, Czech Republic, on Feb. 1. (AP-Yonhap News)
Ice wine, which is believed to have been invented by accident in Germany in the late 18th century, is made in several European countries, including Switzerland, Germany, Austria and Slovenia, in addition to Canada and the U.S. It goes well with sweet desserts.

In the Czech Republic, a tradition of winemaking has been undergoing a considerable revival after decades of stagnation under communist rule, which ended in 1989. This winter, though, many people had already given up and harvested the grapes the grapes originally meant to be used for ice wine because of fears they could be damaged by warm and rainy weather, eaten by birds or simply stolen by thieves.

“They just thought it’s better to be safe than sorry,’’ said Jiri Sedlo, chairman of the Czech Association of Winemakers.

Zatloukal said the pickers had been ready three times at the vineyard this winter, but the temperature never dropped far enough.

“About 10 days ago, I almost gave up any hope,’’ said Libor Kahoun, the director of a company that grows the grapes for Znovin. “But we decided to wait because the grapes were in very good condition.’’

We expect a high quality vintage,’’ Zatloukal said. “The grapes are healthy.’’

The pickers didn’t seem to be bothered by the freezing conditions.

“I don’t care much about the cold, we’re used to every (type of) weather,’’ one of them, Iva Rezacova, said. “This is not a punishment for us. We’re dealing with the ice wine grapes,’’ she said with a smile, putting the grapes carefully into a plastic box.

In less than two hours, the harvest was over and the grapes taken immediately for pressing.

The entire process was carefully watched by the Czech Agriculture and Food Inspection Authority.

“We have to confirm the origin of the grapes and check the weather condition,’’ said Iva Libenska, an inspector from the city of Brno who arrived equipped with a thermometer.

Ice wine is relatively new in the Czech Republic where it has been produced since 1995 after a new wine law set rules for its making. It forms less than 1 percent of overall wine production in the country but has proved successful.

The 2009 Riesling by Znovin, also grown at the Three Oaks vineyard, won the double gold medal at the San Francisco International Wine Competition in 2010 among other international awards, evidence that local wine production is back on track after the collapse of communism.

A 200-milliliter bottle sold for 435 koruna ($22.50) at the Czech Wine Saloon, which offers the top 100 Czech wines of the year, in the southeastern town of Valtice near the border with Austria.

Marek Drobisz, head sommelier of the National Wine Center in Valtice said for him ice wine represents “the top of winemaking art. Only the best can make it.’’

He said it could accompany a sweet desert, but also “foie gras together with a small glass of ice wine makes a perfect gourmet experience.’’

Czech producers made a total of 16,400 liters of ice wine in 2010, according to figures from the Czech Association of Winemakers. Up to 10 percent of that amount could have been exported, association secretary Martin Pucek said.