“It is a great opportunity for us that India’s car market is becoming ever more competitive. We’re a strong player in the compact segment already, but our long term plans are to achieve such status in the mid-sized, luxury and sports utility vehicle segments,” Park said in an e-mail interview with The Korea Herald.

Hyundai is the second-biggest carmaker in India with about 19 percent market share where more than 70 percent of vehicles sold are compact cars. Park’s plan is to increase the market share to 20 percent this year as it launches the new version of the mid-sized Sonata and Elantra. The push would signal Hyundai’s tackling of the mid-sized segment now that Eon, the smallest car Hyundai has ever launched, has taken off as a leading small car in India in just three months since October.

“We can sell way more than now if we set prices even lower, but we won’t. We aim to build a premium brand in the upper segments, which is even more promising than the compact segment,” Park said. 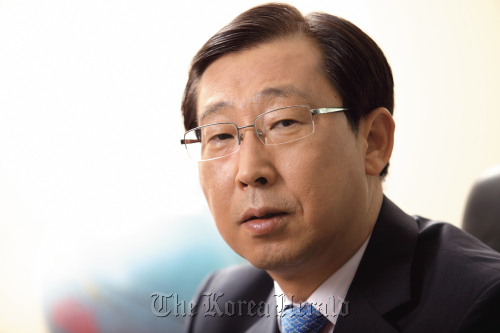 Hyundai Motor India CEO Park Han-woo
Park says it’s important to be aggressive given how fast the industry has been changing.

“When I first came to India nine years back, Maruti Suzuki had dominated the industry with over 80 percent market share. Now almost all global players are competing in the market, and India’s auto industry will grow on the mid-sized, SUV family cars,” he said.

Before Hyundai, Maruti was the only small-car marker in the scene. Then came in Tata Motors and others, each trying to elbow into the crowded space. Ford, Toyota, Honda, Volkswagen, Nissan and General Motors joined the rush to introduce small cars in the last decade even as Maruti and Hyundai continued to strengthen their line up.

But the landscape is changing. The leading three ― Maruti Suzuki, Hyundai Motor and Tata Motors ― lost their market share last year to mainly Ford India and Volkswagen, the Society of Indian Automobile Manufacturers said, highlighting the need for a more colorful line up.

In addition to the new Sonata and Elantra, the company will make up to 13 launches in India over the next five years.

“We will sell more than 600,000 vehicles from India this year, including the exports,” Park said. The company is widely expected to meet the goal, analysts said, given it is a conservative figure it has nearly achieved in recent years.

The carmaker in January said the Indian auto industry will post a single-digit growth this year, slowing down from 30 percent growth in the year that ended in March 2011. The SIAM said rising finance costs, higher prices of fuel and increased input costs for carmakers have deterred buyers in the past two quarters, but growth will pick up again in 2013.