AMMAN ― No matter how many times you travel abroad, there is something about Jordan that makes it difficult for the memory to fizzle out.

With unforgettable natural landscapes and historic sites including the footsteps of history’s heroes, Jordan is an awe-inspiring land.

Your journey to biblical relics spotted across Jordan may be also rewarded by a spiritual experience that stirs the soul.

Jordan’s magical experience starts at night in the ancient city of Petra, located three hours south from the capital Amman by car.

To the entrance of Petra, the 2km walk through a narrow natural sandstone gorge under complete silence and the inky night is an experience that you may never forget.

The deep valley path called Siq, with rocky walls towering up nearly one hundred meters, is lit only by candles in brown paper bags placed along the route and a shower of stars overhead.

Another amazing experience comes at the end of the Siq, where Petra’s most famous monument, the Treasury, looms majestically.

Carved from the rocky cliff face, the 39.5 meter-high Treasury overwhelms visitors with its magnificence and elaborate sculptural design. 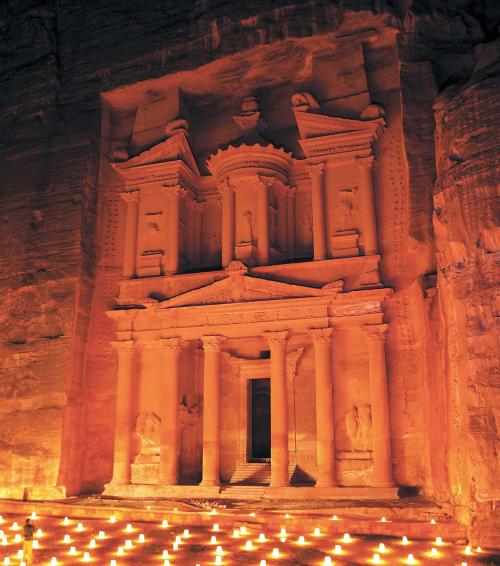 The Treasury monument in Petra at night (Jordanian Tourism & Antiquities Ministry)
It is not known exactly when the monument was built, nor what its purposes were. Many archeologists believe that it is the royal mausoleum of King Aretas, who ruled the Nabateans (9 B.C.-A.D. 40), a nomadic tribe in the Middle East. Some say it was later used as temple.

Its towering faade appeared in the final sequence of the 1989 film “Indiana Jones and the Last Crusade.”

Hiding its attraction beneath the darkness, the Treasury greets visitors with about 1,000 paper bag candles on the ground, as well as traditional Bedouin (desert-dwelling Arabian tribesmen) music and tea.

The Petra by Night program, which is open to guests only two nights a week, ends there, providing just a glimpse of the mysterious rock city of Petra, built at around 6th century B.C. by the Nabateans.

As the minister suggested, a daylight visit to Petra is the most memorable experience.

The colorful rocks and bizarre-looking geological formations in the deep and narrow gorge disappeared as night unfolded before our eyes.

“Wow, it is the most amazing view that I have ever seen,” said a Korean visitor who works at a tour agency.

The entire area around Petra is surrounded by rocky mountains riddled with passages and gorges offering dramatic and varied landscapes.

Behind the giant Treasury monument, visitors can enjoy a panoramic view of the ancient city. There are hundreds of tombs, temple faades and funerary halls.

A 3,000-seat theater from the 1st century, a Roman-style palace tomb and a gigantic monastery are also major relics of the ancient city.

For its stunning attractions, Petra has long been Jordan’s most valuable treasure. It is listed as a UNESCO World Heritage site and one of the seven wonders. The BBC also picked Petra as one of “the 40 places to see before you die.”

Petra wasn’t discovered by the West until 1812. It was a bustling trade city that connected travelers, visitors, and pilgrims.

In addition to its rich historical heritage, Jordan, like Israel and Egypt, boasts of many Biblical relics.

From Moses to Jesus, this is a land where the footsteps of many Biblical figures remain.

For Christians in particular, Jordan is a must-visit country because it is the place where John the Baptist preached, where Jesus taught and performed a miracle, and where Moses completed his mission from God. 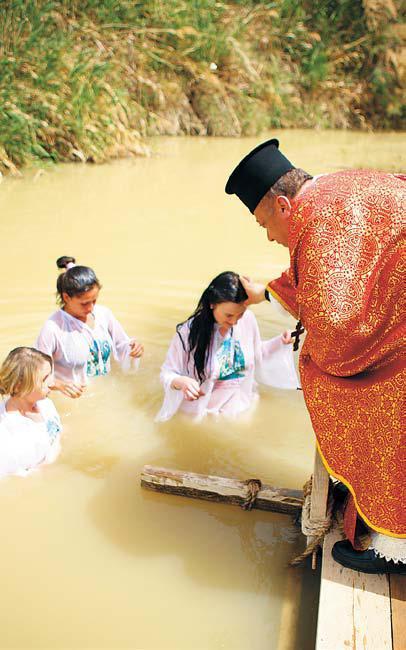 The sacred location around the River Jordan running through the border between Jordan and Israel is bustling with pilgrims from Asia, Europe and North America.

Many pilgrims visit this place to be baptized as Jesus was. Julia Sadovske, a Ukrainian tourist, was one of them. She changed her clothes and was submerged briefly under the cold and muddy-colored water in a solemn ceremony.

“I cannot believe that I came to where Jesus Christ was baptized,” she said after being baptized by a priest in the river.

Jordan is also home to many other Biblical destinations such as Madava, Mount Nebo and the King’s Highway.

Madava, dubbed the City of Mosaics, is home to the contemporary Greek Orthodox church of St. George with a vivid 6th century Byzantine mosaic map showing Jerusalem and other holy sites. The map consisted of about 2 million pieces of colored stone.

The mountain was the first station in Moses’ historic flight from Egypt to the Holy Land, is the place where Moses was buried and is the most revered holy site in Jordan.

On the summit of this mountain, visitors can overlook the Jordan River Valley, the Dead Sea, Jericho and Jerusalem.

There are also many spectacular natural landscapes in Jordan such as the Dead Sea, Wadi Rum and Aqaba.

The Dead Sea is shared by Jordan on the east coast and Israel on the west. In particular, Jordan has attracted many visitors for both religious and health and wellness tourism.

The 80km-long and 14km-wide Dead Sea is more than 410 meters below sea level, making it the lowest point on the earth. The water is famous for making it impossible to sink because of its high concentration of salt and minerals. 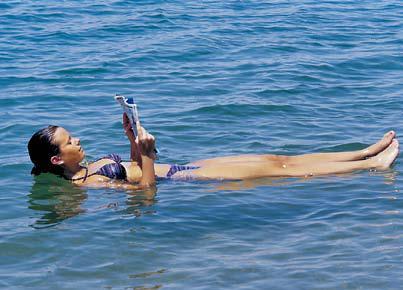 A woman demonstrates the unusual buoyancy in the Dead Sea. (Jordanian Tourism & Antiquities Ministry)
Tourists visit this land-locked sea to have a first-hand experience and receive extraordinary spa treatments.

In addition to its top-level spa facilities, the area around the Dead Sea has Biblical significance. This is the place believed to have been Sodom and Gomorrah and the place where God gave his Ten Commandments to Moses.

The 130km-long desert is located on an ancient camel trading route to the Arabian Peninsula. It has long remained untouched by development.

Unlike other deserts in other countries, Wadi Rum has many spectacular sandstone outcrops, including the highest one at about 1,750 meters. The wildlife reserve is home to about 5,000 Jordanian Bedouin tribesmen living in traditional goat hair tents. 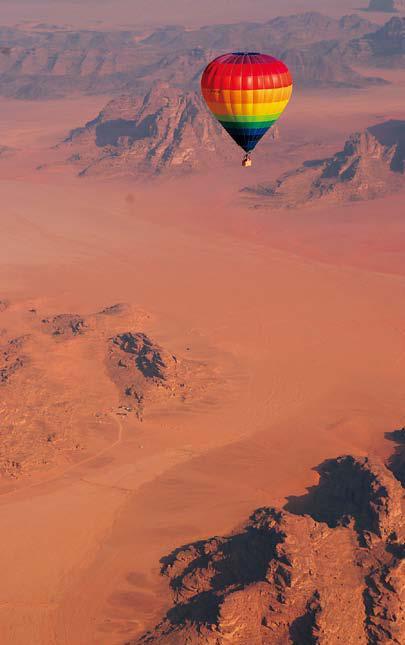 The Jordanian tourism authority also recommends a tour to Aqaba port on the southern tip of the nation. Famed for its preserved coral reefs and unique sea life, this Red Sea port city was, in ancient times, the main port for shipments from the sea to the Far East.

Because of its beautiful ocean view, more and more beach resorts are under construction and seeking investment in this costal city.

How to get there

One way to visit Jordan is to fly. There are no direct routes between Incheon and Amman, but flights linking Incheon-Abu Dhabi-Amman are available.

The premium carrier Etihad Airways operates six flights from Incheon per week. It takes nearly 16 hours including layovers and transfer time. The Abu Dhabi-based airliner was chosen as the World’s Leading Airline in 2010 and 2009.