There are thought to be thousands of children in northeast China whose parents have died or fled after escaping with them from North Korea, leaving them stateless and without support.

The Love North Korean Children charity is raising funds after visiting a potential site for a new home to help them.

Charity worker Shirley VanderSchaaf, said that the new site, complete with apple orchard, had the potential to help many North Korean kids. 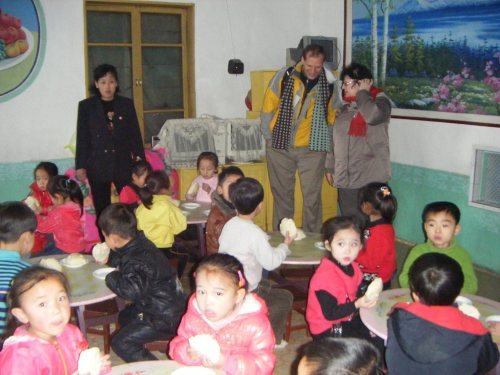 Shirley VanderSchaaf and Robert Brownell watch children eating bread made at a Love North Korean Children bakery in Rajin, North Korea. (LNKC)
“We were very happy with the site,” she said. “We decided to work toward the purchase of this site and establishment of an orphanage for children.”

The location is being kept secret to protect the children that could live there in the future.

Baking in the North

The bakery in the Rajin free economic zone provides bread for 3,000 children each day. It is one of the charity’s three bakeries in the country with others located in Pyongyang and Hyungsan. A fourth will soon open in Sariwon, in the southeast part of the country. And VanderSchaaf said the winter visit offered insight into the country just before the fall of its leader.

Before visiting the bakery in the Song Bong area of Rajin, the group experienced daily life in the region first-hand with a trip to a local market.

“There was much selling, but what amazed me was the amount of buying there was ― people were crazed to buy. They were pushing and shoving and walking over each other to keep the tightly packed mass of humanity moving from stall to stall.”

While some poorer women were trying to barter vegetables and shellfish outside, people inside the market were keener to purchase brightly colored Lego brought back from China by stallholders.

“There were many tables with stuff from China and food for sale, prepared by the locals. I was surprised at the size of the market. It was huge and filled two large warehouses,” she said.

She also described the “harrowing experience” of traveling along snow-blocked roads in unprepared vehicles at minus 35 degrees Celsius to reach the LNKC bakery. Although the factories they saw en route were closed, the trip allowed the party to watch North Koreans hard at work.

“There is one thing that North Korea has that is extravagantly utilized and that is manpower. Every man, woman and child could be seen shoveling ― not just in the town of Rajin but the roadways as well,” VanderSchaaf said. “They used summer digging shovels and custom-made shovels made of cardboard and sticks; but no actual snow shovels ― not as western nations define snow shovels anyway.”

She said the biting cold was a reality check on daily life for the impoverished people living inside North Korea.

“Sane people stay indoors when it is minus 35 degrees Celsius but what do people do without any real indoors for shelter? Or what do they do if they have no fuel to heat their homes?” she said. “These dire variables are the general rule in North Korea.”

But the group saw their charity at work upon arriving at Song Bong bread factory. They witnessed flour and baking supplies being unloaded from a truck before going to the local school to meet the children.

“Before we distributed the bread, the children sang to us,” VanderSchaaf said. “Of course, they sang a song of praise to their leader. Their songs sound like Christian praise and worship songs; except their lyrics are words of adoration to their Great Leader and one of the songs was a new one giving praise to Kim Jong-un, Kim Jong-il’s successor.”

After hearing the songs from the unsmiling children, they handed out bread and watched them eat it, without any milk or water.

“The children seemed appreciative of the bread and were cute, even though it appeared as if they lacked water to wash their bodies,” said VanderSchaaf, adding that the children showed no curiosity in their Western visitors.

And she described the propaganda started in youth and carried on in every area of life.

“There is propaganda everywhere. Loudspeakers when you wake up and when you settle in for the night. Anti-American stamps and anti-Japanese stamps are common souvenir items in their gift shops. There are even stamps that show North Korean soldiers celebrating over U.S. graves.

Donations to Love North Korean Children can be made via the charity’s Kookmin Bank account: 578601-01-128023. For more information or other donation methods go to www.nkchildren.org or e-mail lovenkchildren@hotmail.com.