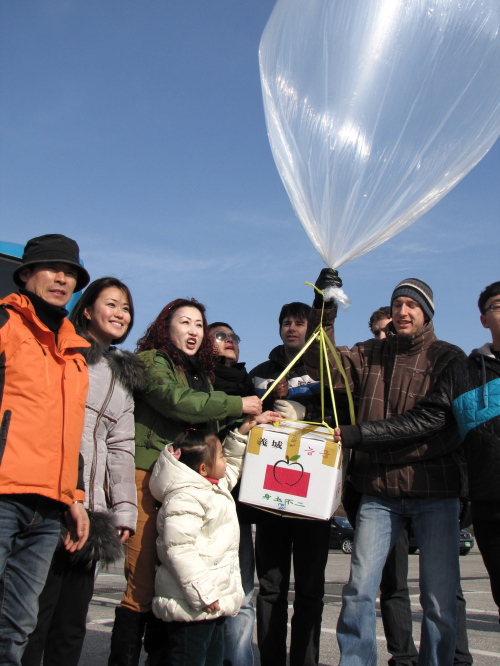 North Korean defector Lee Ju-seong (left) and international volunteers prepare to launch aid balloons in Paju on Saturday. (Kirsty Taylor/The Korea Herald)
When Lee Ju-seong first picked up a flier on a North Korean mountain in 1995, the locals he was with told him to put it down because it was “evil.”

Bur Lee could not bring himself to discard the document he found while walking in North’s Gangwon Province, not far from the South Korean border.

“The people were locals to the area. They were shocked and said don’t pick up that.” Lee said. “They said that is a flier from South Korea. There is evil words and evil information there.”

But Lee’s curiosity made him pocket the document and excuse himself from the group, saying he had to go to the bathroom.

“I took it out of my pocket and opened it when I was alone. Contained in the leaflet was the technological advancements in South Korea.”

When he read the information, about a new 400,000 ton South Korean oil tanker, he was astounded at the development across the border.

“I had been told by the North Korean government since childhood that there are so many homeless people, that they eat off the ground and that there are beggars in South Korea ― that it is a really poor country.

“When I saw that flier I realized that both countries are saying they are better than the other.”

After the flier, Lee started sneaking into China. After discovering the words “church” and “God” for the first time there, he attended some South Korean Christian services. He eventually made his escape from the North to travel via China and Thailand to South Korea in 2006.

Almost immediately, the defector started using his own money he earned from odd jobs here to balloon aid and messages to the people he had left behind.

Now, international volunteer group North Korea Peace is bringing people from all over the world together to help his cause.