It’s quite fascinating to meet Choi Min-sik in person.

For those who have never met this prolific actor off-screen, it’d be hard to imagine him as someone so down to earth and “normal.” On top of everything else, his face is that of the gruesome serial killer in “I Saw the Devil,” and the child murderer in “Sympathy for Lady Vengeance.”

In real life, however, Choi is a fan of popular girl group Girls’ Generation, loves to cook and clean at home, and is surprisingly casual. Dressed in black with messy hair, he often loses that charisma he shows off on the silver screen, with his simple, good-natured smile. He talks enthusiastically without formalities, which makes him even more approachable.

“You know, this is all about my work, and I take it seriously,” Choi says in a group interview with reporters in Samcheong-dong, Monday. “When you play the villain, you should not think what you are doing is something horrible. They think what they are doing is right for everyone; they’d go crazy if they don’t do it. Many would not think so, but villain characters are extremely layered and complex. They have a series of reasons why they do such horrific things. For example, if you are an ordinary person who happens to hate the color red, you’d just try to avoid that color as much as possible. But if you are a psychopath, it just becomes so unbearable that you’d have to completely get rid of the color from your world, even women who are dressed in red.” 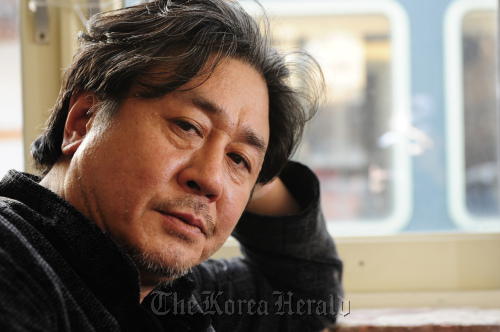 Actor Choi Min-sik poses for a photo in Samcheong-dong, Monday. (Park Hae-mook/The Korea Herald)
Choi is returning to the big screen as another villain character in his upcoming film “Nameless Gangster, in which he teamed up with actor Ha Jeong-woo.” Taking place in Busan in the 1980s, Choi plays a corrupt customs officer, who ends up working with street gangsters to support his family. He is a shameless liar and completely immoral, manipulating people for his own benefit. Yoon Jong-bin, who directed the film, has told reporters that he made the film as he was curious about what his own father, who was mostly quiet at home, would’ve been like at his work.

“This character is a complete bastard, there’s no question about that,” says Choi. “But he is a father. And that’s what makes this character so convincing and superbly layered. He does all kinds of immoral deeds but feels no shame or guilt because he thinks it’s the only way to feed his family. I’m sure there were a lot of fathers like him in that particular time period.”

In 2006, Choi famously demonstrated in Seoul and at the Cannes Film Festival against the government’s decision to reduce the number of days theaters were required to screen local films from 146 days to 73 days.

When asked if he expects to win any awards at Cannes for the role in the upcoming film, Choi gives a rather unexpected answer.

“You’d think I wouldn’t get nervous in front of celebrities,” he says, laughing. “International film festivals really aren’t about winning awards for me. I had a fantastic time there, mainly because I get to see the people whom I had been dreaming to see. When would you ever have dinner with Roman Polanski and talk about ‘Oldboy’? When would you drink wine with Tilda Swinton and Quentin Tarantino? I could not believe it when I saw Martin Scorsese, because I grew up watching ‘Taxi Driver.’ I even asked one of the people I met there for an autograph. I can’t tell you who the person is!”