According to the Navy, the military dispatched 320 troops, including a platoon of amphibious armored vehicles, a battalion of Marines, and a 2,600-ton amphibious assault ship. 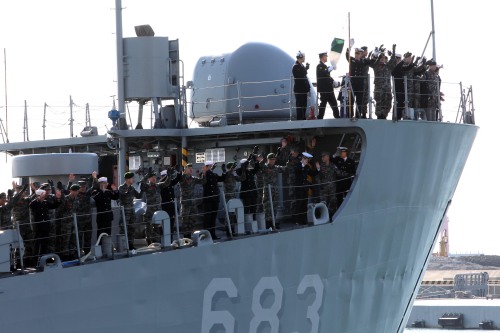 A Korean Navy amphibious assault vessel carrying soldiers who will take part in the Cobra Gold exercise in Thailand from Feb. 5-17 leaves port in Busan on Thursday. (Yonhap News)
In this year’s exercise, scheduled to run from Feb. 5 to Feb. 17, Korean forces will participate in drills alongside units from Indonesia, Japan, Malaysia, Singapore, Thailand and the U.S.

In addition, nine countries including China and Russia will participate as observers.

The Navy said the exercise would be divided into three areas ― humanitarian civic action, command post exercises and field training exercises ― that are designed to improve the participating nations’ ability to respond to developments in war zones.

The Cobra Gold exercise was first held in 1981 under the leadership of the U.S. Pacific Command and the Royal Thai Armed Forces. Korea became involved in the exercise in 2002 as an observer. The country continued as an observer until 2010, when 300 marines took part in the exercise for the first time.