Mike Harrington, from the U.S., set up his own microfinance group to teach his students at Daejeon’s Namseon Middle School about aid projects.

“The group was initially set up as a means to expose students to those in need, and to give an example of an aid project that is serving them,” Mike said. “After briefly discussing it in class, I decided that I would also use it as a means to reward students who are striving to improve their English skills. The students that participate in my summer and winter English camps are helped with setting up a profile on the website, and some of the prizes from English camp include gift cards from Kiva, so that students can make their first micro loan to a borrower of their choice.”

Kiva connects lenders with people in need to alleviate poverty. The non-profit organization uses the Internet to link a worldwide network of microfinance institutions to allow people to lend as little as $25 at a time to help create opportunities for people without access to funds from other lenders. Almost 700,000 lenders have made $280 million available in loans since Kiva started in 2005. And they have had a 98.88 percent repayment rate. 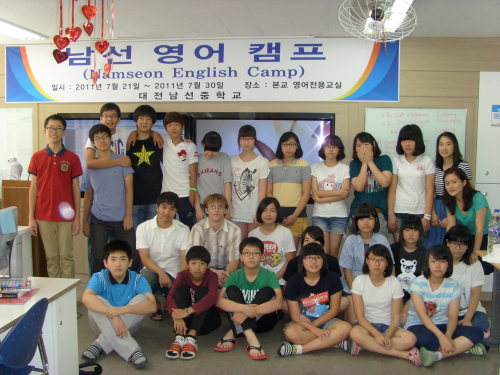 English teacher Mike Harrington takes a break from class with his students at Namseon Middle School, Daejeon.
Mike’s students have chosen to fund a variety of projects listed on the site from 60 different countries around the world. The kids have chosen to lend cash to people in Uganda, Bolivia, Zimbabwe, Nicaragua, Guatemala, Iraq, Mongolia, Pakistan, Togo, Honduras, Vietnam, the U.S., Philippines, Chile, Tajikistan, Kyrgyzstan, Cambodia and Israel.

Mike, who has been teaching in Korea since August 2010, thought the kids were enjoying the project, even though he faced difficulties in getting them to understand the concept in a second language. He currently pays for the gift cards that his students donate, but hopes that they will become passionate enough about the projects to start putting up their own cash as loans in future.

“This project is just an idea I had one day, and quickly decided to implement. I would say that it hasn’t even come close to fruition yet ― it’s definitely a work in progress,” he said.

“I’ve had a few students tell me that they went home and made a profile. A few students have had their loans fully repaid, and have chosen to lend out the money to a new borrower and start the process again. I hope to get the kids more involved, and hopefully get them to get their families involved as well.”

His group is now expanding from 51 to 75 members as more students make their own Kiva profiles. The group has made 24 loans so far and Mike hopes that many more will follow to help people improve their livelihoods around the world.

For more information on Kiva go to www.kiva.org and search for the Namseon Middle School group.