It’s a slow 7 miles per hour on the steam-powered trains up Cheat Mountain to Whittaker Station and upward to Bald Knob on Back Allegheny Mountain.

That’s a climb of nearly 2,400 feet in 11 miles to Bald Knob (one of the highest peaks in West Virginia) with grades of up to 11 percent.

The line from Cass to Bald Knob was originally built in the early 1900s by the Greenbrier & Elk River Railroad Co. to haul timber out of the Allegheny Mountains in east-central West Virginia.

Today the line to Bald Knob winds from Cass at an elevation of 2,452 feet, up Leatherbark Creek, through the forests and up two switchbacks to Whittaker Station at 3,264 feet. 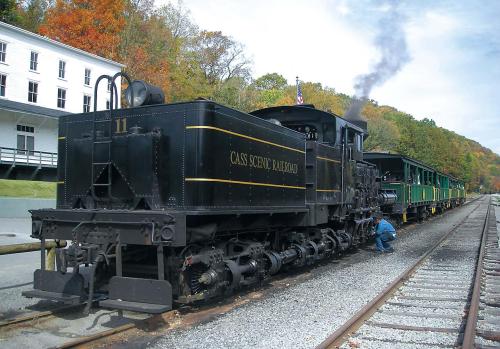 A staffer on the Cass Scenic Railroad checks the historic Shay steam locomotive. The historic hamlet of Cass, West Virginia, is a state park and attracts 75,000 visitors a year. (Akron Beacon Journal/MCT)
There you can picnic or visit an old lumber camp to learn what it was like to be a so-called wood hick living in the woods and logging nearby mountains in the 1940s. The camp was built and is operated by the Mountain State Railroad & Logging History Association.

The line continues north past the old logging town of Spruce at 3,950 feet and then to Bald Knob at 4,842 feet elevation. You can climb an old fire tower or hike through a red spruce forest more typically found in Canada. The summit is just over a half-mile and 140 feet above the train’s stopover point.

You are likely to catch a big whiff of smoky soot from the locomotive as you sit in open-sided rail cars. But that’s part of the old-time charm.

The park also includes much of the hamlet of Cass, a one-time lumber boom town with 2,000 residents, with its old company-owned houses and buildings. It is on the National Register of Historic Places.

All told, the park covers fewer than 400 acres.

The railroad was built in 1901 by the West Virginia Pulp & Paper Co. It cut and harvested red spruce trees for papermaking in Covington, Va. A sawmill was quickly added.

A 44-car train filled with red spruce left Cass daily for the Virginia mill. Up to 10 rail cars per week of supplies went through Cass to a dozen logging camps in the surrounding hills.

West Virginia Pulp & Paper built the hamlet of Cass and continued its lumbering operations until 1943, when it was sold to the Mower Lumber Co. It closed in 1960.

Cass housed a giant planing mill. It was three stories high and measured 224 feet by 96 feet. It housed flooring machines that took 15 men to operate. All four sides of the flooring were finished in one operation.

The state of West Virginia acquired the railroad in 1961 and the tourist trains began running in 1963. It got 23,000 passengers that first year. The line was expanded to Bald Knob in 1968 and the state acquired much of the town in 1977.

The Cass Scenic Railroad is one of the only authentic museums for lumber railroads in the United States. West Virginia once had 3,000 miles of logging railroads.

Today the railroad offers excursions from late May to late October in Pocahontas County. It annually attracts 75,000 train passengers and 100,000 park visitors.

The railroad has five Shay steam locomotives, one Heisler and one Climax. The engines were designed especially for mountain use.

Its flagship locomotive is Shay No. 5 that was built in 1905. The C80-3 Shay has been running on Cheat Mountain for more than 100 years. The 90-ton locomotive was designated West Virginia’s official state steam locomotive in 2004 by the state legislature.

The passenger cars are refurbished logging flat cars made into open-sided passenger coaches. The railroad typically offers four trips per day: three 90-minute round trips of eight miles to Whittaker Station and one 4.5-hour round trip of 22 miles to Bald Knob.

Tickets are higher in the fall foliage season, late September through Oct. 30. The railroad offers weekend charters in the spring. Group rates are available and the railroad also sponsors dinner trains and other special events.

Tickets include admission to the Cass Showcase with its slide show and diorama, the Railroad and Logging History Museum and the logging camp tour.

Free tours of the railroad locomotive repair shop and the town of Cass are offered regularly. Cass is compact and it’s easy to do a half-hour walking tour on sidewalks, alleys and wooden boardwalks. The town has changed little from the early 1900s, officials say.

You can walk past the old Cass Hotel. It was reputable and on the right side of the tracks from other hotels, bars and brothels on Dirty Street across the tracks and other locations across the Greenbrier River.

The old three-story company store next to the depot was built in 1902 as the Pocahontas Supply Co. and now houses a restaurant and museum.

Today the post office is in an old meat market that once butchered 25 pigs and 25 cows a week to feed the residents of Cass.

But the most striking thing about Cass is the former company-owned houses that are still standing. You can even rent one.

The nearly identical two-story white houses, built in the early 1900s, each have a living room, dining room and kitchen downstairs and three bedrooms upstairs. Bathrooms were added starting in the 1920s.

Owners and renters could put on additions with free lumber from the company. When a house was sold, the deed included a provision that the house could only be sold back to the company for the exact amount that the worker had paid for it.

The company-owned houses line several streets and have been restored. At present, 20 cottages are available to rent. They draw tourists and train buffs spring to fall and skiers in the winter. Snowshoe Mountain, the largest ski resort in West Virginia, is 11 miles west of Cass off state Route 66.

The Cass cottages can accommodate 6 to 12 people. They are equipped with microwave stoves and televisions with basic cable. There is no air conditioning and no telephone. Rates range from $75 to $111 a night depending on the season.

On Bald Knob, you can rent a cabin once used by a ranger who manned the nearby fire tower. You ride the train and then hike three-quarters of a mile to the cabin. The rate is $50 a night plus railroad tickets.

Pack lightly for the cabin or cabooses, because space on the train for your gear is limited.

For information on the railroad and its operations, contact Cass Scenic Railroad State Park, 304-456-4300, 800-CALL-WVA, www.cassrailroad.com.

For information on the Mountain State Railroad & Logging Historical Association, the nonprofit foundation and partner with the Cass Scenic Railroad, see www.msrlha.org.