The Jang Bo-go base, named after a ninth-century admiral who helped strengthen the country’s maritime trade in East Asia, is scheduled to be completed in Terra Nova Bay by March 2014, according to the Ministry of Land, Transport and Maritime Affairs. 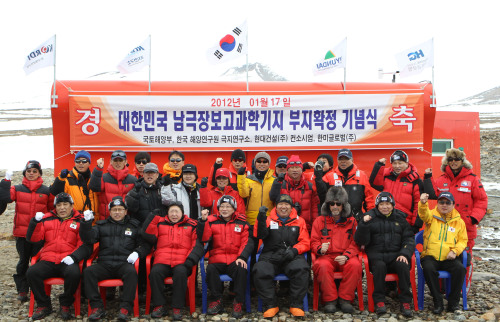 Joo Sung-ho (front row, fourth from left), second vice minister of land, transport and maritime affairs, and other participants pose to mark the construction of the Jang Bo-go research station in the Antarctic on Tuesday. (Yonhap News)
The country’s search for the site of a second Antarctic research station began in 2006 with the bay, located on the 74th parallel south, initially tapped in early 2010.

Its first research station, the King Sejong base located on King George Island and on the 62nd parallel south, has been operational since 1988.

“Our country began its Antarctic research in 1988 with the construction of the King Sejong base, but its research capacity has been limited by its geographical location,” Vice Minister Joo Sung-ho was quoted as saying.

“More active research will be possible following the completion of the Jang Bo-go base in March 2014,” said the vice minister, who is currently visiting the site.