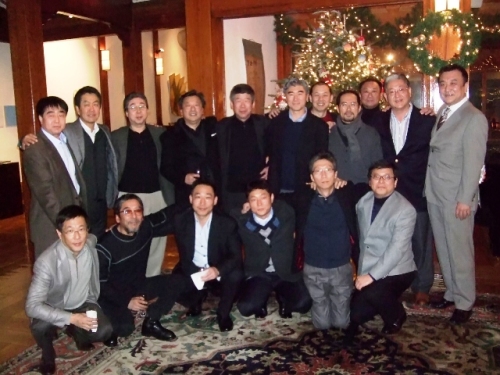 Ambassador Sung Kim (back row, center) enjoys a reunion with elementary school friends at his residence in Seoul. (U.S. Embassy)
The American ambassador here has held a school reunion for his old Korean elementary school classmates.

Sung Kim, who attended Eunseok Elementary School in Seoul until he left Korea in third grade, reunited with his former school buddies at a dinner at his ambassadorial residence in Seoul.

“I attended Eunseok Elementary School over 40 years ago,” the ambassador wrote in a blog posting about the event. “Even though a lot of time has passed since then, my memories of my teachers, my classrooms, and of course my fellow students are still very clear ― it certainly doesn’t seem as if four decades have gone by!”

The ambassador met his old school-mates to share old photographs and memories, learning that they are now working in diverse areas such as business, medicine, publishing and music. His old elementary school friends also presented him with a plaque to mark the occasion.

“In Korea, elementary school students form lasting friendships with each other,” wrote Kim. “That’s also true in the U.S., but, I think to a lesser extent; it’s more common, for instance, for Americans’ closest friends to be their high school and college classmates.

“I am extremely lucky to have been a part of both cultures and to have deep friendships with people from every part of my life.”

Kim also posted a picture of him as a young elementary student in Korea, before he moved to Los Angeles to attend middle school and high school there.

He has also mentioned that he is keen to get out of Seoul to see more of the Korean countryside and to try more Korean food.