The cash and stock deal brings the “Twilight’’ franchise ― which has grossed more than $2.5 billion worldwide since the first movie blew out of the gates in late 2008 ― under the same roof with Lions Gate’s upcoming four-part series based on Suzanne Collins’ young adult novels, “The Hunger Games.’’

“They have a tremendous outreach with fans and the ability to reach them through email, Facebook, et cetera,’’ Lions Gate CEO Jon Feltheimer said of Summit. “Starting right now, today, we are going to utilize that institutional knowledge to move ‘Hunger Games’ ahead even more quickly.’’

As members of a management team that owned 30 percent of the company, Summit co-chairmen Rob Friedman and Patrick Wachsberger wound up with a hefty payday.

But they said they would stay on to run Summit as a subsidiary.

“It was never about cashing out; it was about making sure this historic company we built continues to live on, now with healthy parental support,’’ Friedman said. “At the end of the day, this became the best and most exciting opportunity to keep the company going and make it 2 and 2 equals 5 or 6.’’

The finale of Summit’s five-movie juggernaut, “The Twilight Saga: Breaking Dawn Part 2,’’ is due out in November. Hordes of fans of the Stephenie Meyer books have rushed to theaters in the series’ four-year run.

The “Hunger Games’’ is equally popular; its three books rank 1, 2 and 3 on USA Today’s best-seller list with about 23 million books in print. And fans are eagerly anticipating the movies, which kick off in March.

Lions Gate vice chairman Michael Burns said the majority of the purchase was funded with about $300 million in cash on Summit’s books. It paid another $55 million from its cash reserves, took on new debt of $45 million and paid $50 million in stock. Another $20 million will be due in cash or stock within 60 days.

At the close of the deal, Summit’s existing term loan was refinanced with a $500 million debt facility secured by revenue from Summit’s upcoming and existing films. 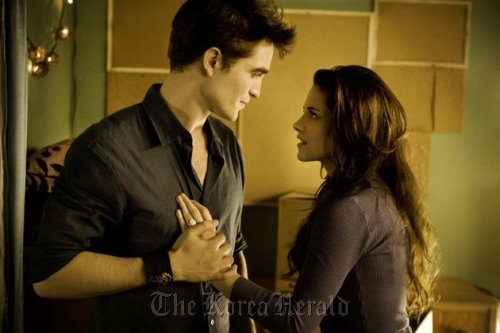 A scene from the movie “Twilight” (AP-Yonhap News)
Lions Gate said that debt is expected to be repaid well before the maturity date in 2016 and added that the transaction will “significantly’’ boost Lions Gate’s earnings starting in April.

Feltheimer said Lions Gate would look to consolidate and pare down the combined studios’ upcoming slate of movies but didn’t specify how much. Before the merger, they were on track to release a combined 22 to 27 films a year, on par with Hollywood’s biggest studios. Time Warner Inc.’s Warner Bros., for example, aims to put out 18 to 22 movies a year.

For Summit’s owners, the deal represents another big payout following a special dividend of around $200 million that accompanied a $750 million refinancing in March 2011.In addition to Summit’s management, the biggest winner is its majority owner, Peak Group Holdings.

Emilio Diez Barroso, whose Nala Investments fund was an equal minority partner in Peak, said the return was nearly six-fold since investing in Summit 2007.

Ever since the blockbuster debut of “Twilight’’ in November 2008, the company has had reams of interest from other companies and investors.

“Everything changed,’’ said Barroso, a member of the Azcarraga family that founded Mexican TV giant Televisa. “The question was, ‘How do we leverage this momentous occurrence?’’’

Lions Gate Entertainment Corp. already has a strong TV studio, which makes popular series such as “Mad Men,’’ “Weeds,’’ “Nurse Jackie’’ and is the key distribution partner of comedian Tyler Perry for his shows “House of Payne’’ and “Meet the Browns.’’

The studio had been distracted recently by a lengthy shareholder battle with activist investor Carl Icahn, who finally agreed last year to sell most of his shares and focus his attention elsewhere. Lions Gate had also taken a close look at buying faltering studio Metro-Goldwyn-Mayer Inc., but lost out to creditors who took it over in late 2010.