“By studying and learning about each other we can expect better cooperation opportunities and friendship in the future.

“It seems to me kind of late to have the first comprehensive book on Hungary in Korea now in 2012, but bearing in mind that the bilateral relations go back a little more than 20 years, I think it is still a wonderful achievement,” Hovari added. 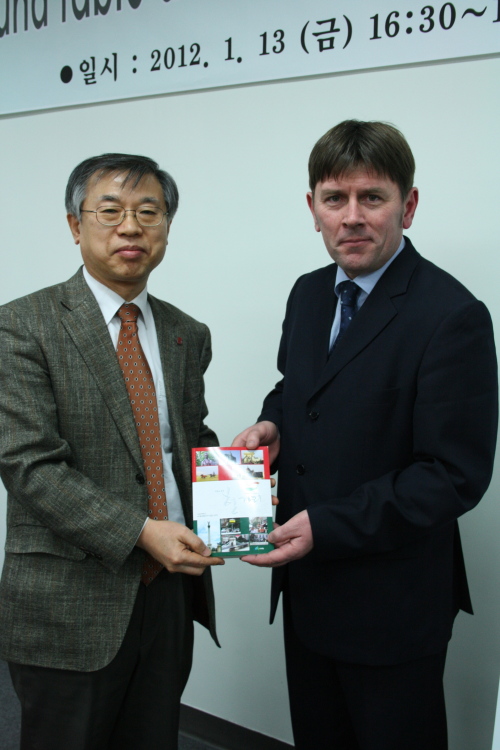 Prof. Lee Kyu-young (left) and Hungarian ambassador Lengyel Miklos hold a copy of “Hungary at a Glance” at Sogang University on Friday.
He said that Hungary had become a kind of business hub for Korean companies in Europe over the last 24 years of diplomatic relations, with many Korean companies building production bases, assembly lines and research centers there.

“For sure, the publishing of this book signals an outstanding momentum which underlines that the bilateral relationship entered into a new elevated phase. I am fully convinced that written on the basis of our 24-year-old friendship, the book ‘Hungary’ can bring better understanding and closer insight for the Korean public,” Hovari added.

The Korean president plans to visit Hungary this year, and a Korean Cultural Institute will also open there in the next few months.

“Hungary at a Glance,” written by the HK Research Project team on Eastern Europe, is the second book in a series published by Sogang University, following “Czech at a Glance.” The next book, “Holland at a Glance” is soon to be released.

“This will be just a small contribution to deeper and better knowledge between Korea and Hungary,” said one of the book’s authors, Lee Kyu-young.