While an ardent promoter of “long vacation culture,” President Lee Charm of the Korea Tourism Organization has yet to settle his winter holiday plans.

With so many things he wants to accomplish in 2012, the final year of his three-year term, it may be a while before Lee maps out plans for another trip around Korea, the country he cherishes so dearly. Lee, a lover of mountains, took a two-week trip around the nation last summer.

“We have a great country with all the right reasons for visitors, but we cannot go on increasing the number of tourists with the limited amount of infrastructure we have,” Lee told The Korea Herald. “It’s now all about the quality and contents.

“This year, we will focus on creating high-quality tourism products to upgrade the nation’s image to overseas travelers.”

Lee, who took office in 2009 as the first naturalized Korean citizen to lead a public corporation here, emphasized the importance of image-making several times.

“I believe our next focus of hallyu should be on fashion. And this goal has become much more plausible due to the popularity of Korean pop musicians all over the world,” he said. “Korean singers have become a new trend around the world, making everything they wear seem very trendy.”

To work on this goal, the KTO has plans for several overseas fashion shows this year, presenting work by up-and-coming designers.

“There was time when Western people regarded Japanese food and the idea of eating raw fish revolting. But it is considered one of the most trendy foods around the globe now,” he said. “Likewise, we have to concentrate on making Korean food seem trendy by creating overseas fans. This is one area that needs spontaneity.”

“We are looking forward to diverse and interesting tourism items,” Lee said. 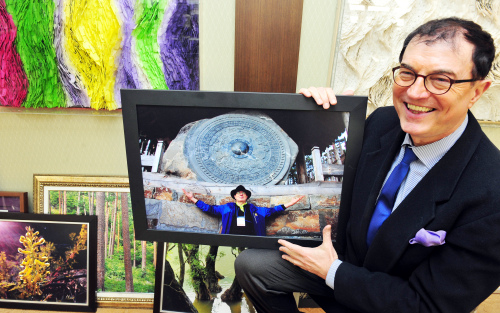 President Lee Charm of the Korea Tourism Organization is seen in his office on Jan. 11. (Park Hyun-koo/The Korea Herald)
Lee, whose German name is Bernhard Quandt Lee, came to Korea in 1978, legally becoming a Korean in 1986. Lee had first used the name Han-woo, meaning “a friend of Korea,” later changing his name to Charm, meaning “participating in Korean society.” Married to a Korean woman in 1982, he has two children.

Lee, who has worked in a variety of sectors ― TV, universities, business and radio ― has already accomplished many things over the past two years as chief of the nation’s tourism body.

Through the “Visit Korea 2010-2012” campaign ― aimed at drawing 10 million overseas visitors annually ― Korea managed to attract some 9.8 million travelers last year. The KTO has also been trying to increase and upgrade accommodation facilities in the country through the Benikea and Korea Stay programs.

“Benikea,” an abbreviation of “Best Night in Korea,” is a list of KTO-affiliated hotels in Seoul, Busan, the southern provinces of Jeolla and Gyeongsang, Jeju Island and more.

The Korea Stay program, which can be seen as a Korean version of Bed and Breakfast, was launched in November 2011, with about 230 households applying to take part. Tourists have spent a total of 500 nights at these private homes so far, paying a reasonable 50,000 won (about $50) per night.

“Building more accommodation remains our No. 1 task. Because it takes too much time to increase facilities via the private sector, the government has to take part in the process,” said Lee.

In a survey conducted in October last year, major travel agencies in China said they could draw hundreds of thousands more to visit Korea “should Korea secure more rooms” to accommodate them, the KTO chief added.

Expecting a large increase of Chinese travelers this year, which marks the 20th anniversary of the two countries setting up diplomatic ties, Lee has special plans for visitors from the neighboring country.

“Many Chinese travelers regard Korea as an inexpensive tourist destination, which can create problems,” he said. “For instance, some group tourists complain about the food after paying about 3,000 to 3,500 won per meal, which is hardly enough to be nicely fed in our country.”

“I’m sure they don’t have same complaints when they visit Japan and Europe,” said Lee.

As one way to solve the problem, the KTO plans to present a luxury package providing the best food, accommodation, sightseeing and leisure activities that can only be enjoyed in Korea.

“This would be effective in changing the Chinese people’s thoughts even if only a few people actually buy them,” Lee said.

Lee also plans this year to continue efforts in encouraging workers in the nation to take a two-week-vacation at least once a year ― to local travel destinations of course.

“We Koreans need to know how to let our hair down now and then,” said Lee.

“And it’s not just that. If everyone in the country takes a 14-day-vacation every year, we’ll be seeing some 14 trillion won in profit,” the chief of tourism said. “Think about what this can do to the local tourism sector and how much more jobs can be created.”