Prime Minister Kim Hwang-sik left the country Thursday to visit Oman and the United Arab Emirates on a trip that will last until Thursday, as Korea seeks alternatives to Iranian oil.

The government is reportedly reviewing plans to reduce oil imports from Iran to 2010 levels while seeking an exemption for Korea in the application of the U.S. National Defense Authorization Act for Fiscal Year 2012, which calls for an Iranian oil embargo, and to prepare for possible developments in the region.

Kim will arrive in Oman on Friday for a three-day trip, where he will meet with Sultan Qaboos bin Said al Said and Deputy Prime Minister Fahd bin Mahmoud al Said on bilateral economic and political ties, his office said. Then, Kim will fly to Abu Dhabi in the UAE to attend the World Future Energy Summit, which runs from Monday to Thursday.

Kim’s visit to the Middle East comes as China and Japan brace for U.S. sanctions on Iran’s crude oil exports and rising tension from Iran’s threat to block the Strait of Hormuz, a transit point for a fifth of worldwide oil trade volume. Iran had threatened last month to close off the strait if the U.S. imposed sanctions on its oil exports. 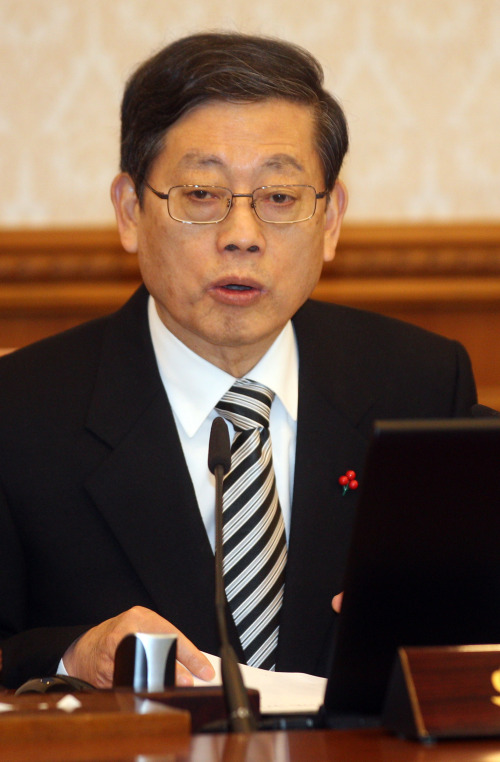 (Yonhap News)
China’s Premier Wen Jiabao is to visit major oil producers including Saudi Arabia, UAE and Qatar from Saturday to Thursday, an apparent move to secure alternative oil suppliers to Iran in case Beijing agrees with the U.S. to cut imports from Iran.

China has so far refused to join the U.S. sanctions on Iranian oil exports, saying Iran is a large oil supplier to China.

However, some observers say it will not be easy for Beijing to reject the U.S. request, considering that U.S. Treasury Secretary Timothy Geithner Wednesday rushed to visit Wen in person to ask for cooperation.

Japan’s Foreign Minister Koichiro Gemba has also visited the Gulf region last week to ask the UAE and Qatar to supply Japan with more oil, as Japan may have to reduce oil imports from Iran due to tighter Western sanctions.

Japan is the third-largest importer of Iranian crude oil, after China and EU, according to U.S. Energy Information Administration. The volume of extra oil Japan had asked for was not disclosed.

Korea bought 244,000 barrels per day from the Middle East country in the first half of 2011, according to the U.S. Energy Information Administration.

Meanwhile, a U.S. delegation led by Robert Einhorn, the U.S. State Department’s special adviser on arms control, will arrive Seoul on Monday for a three-day visit for consultations with the Korean government on sanctions on Iran, the Foreign Ministry said.

“The U.S. delegation will explain the sanctions on Iran included in the U.S. National Defense Authorization Act and future course of action to the Korean government,” the ministry said.

“We will seek U.S. cooperation to minimize the act’s economic impact on Korean companies.”