[ The Korea Herald – Send E-mail ]
Specialty soy sauce cakes a new food fad in Japan
By Korea Herald
Published : Jan 11, 2012 - 18:01
Updated : Jan 11, 2012 - 18:01
KAMAISHI, Japan ― A roll cake flavored with soy sauce made by a company with old roots in the city of Kamaishi has become a popular symbol of reconstruction from the Great East Japan Earthquake in Iwate Prefecture and around the nation.

Before the March 11 disaster, the company sold local specialties at its Kamaishi Tokusanhinten shop in the city. One-fourth of the company’s business partners were directly affected by the disaster. 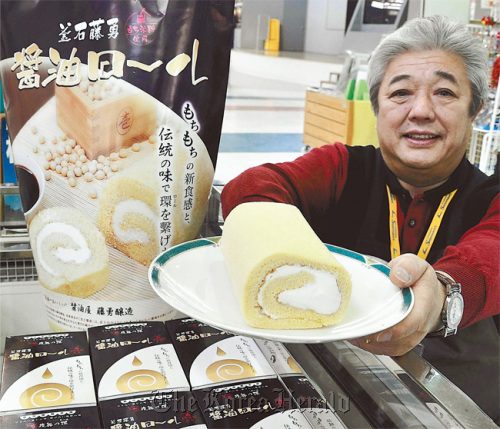 A clerk displays a Shoyu Roll cake at a shop in the city of Kamaishi, Iwate Prefecture, Japan. (Yomiuri Shimbun/MCT)
Yuji Takahashi, a 55-year-old man from the city of Sapporo who came to Kamaishi as a volunteer, proposed in late June that the company develop a new original product to represent the city. The company’ asked the soy sauce manufacturer, one of its existing business partners, to cooperate with the project.

Fujiyu, established in 1902, resumed shipments of its products in June after its factory was damaged by tsunami.

When approached about the project, the soy sauce company agreed to participate “for the sake of our hometown.”

After Takahashi introduced a pastry chef he was acquainted with to Kamaishi Shinko Kaihatsu, the company decided to produce a sponge cake flavored with Fujiyu’s soy sauce to sell as the Shoyu Roll.

Determining how much soy sauce to mix into the batter by trial and error, they were able to introduce the roll cake on a commercial basis in November.

The aroma of soy sauce from the rice-flour sponge cake complements the sweetness of the cream filling ― a combination that has won favorable reactions from a rapidly growing number of consumers.

By late December, about 1,900 roll cakes had been sold and the company was taking orders from consumers living in other parts of Japan, such as Tokyo and Osaka.

Toshinori Kikuchi, 59, a senior official of the company, said: “We want to make the roll cake into a new specialty of Kamaishi. We’re planning to set up a cake factory corner inside our shop to create new employment.”

Next, the company plans to sell another new roll cake made with Hamachidori, a local daiginjo sake, around February.