Prosecutors kicked off an investigation into a whistle-blower’s allegation that a former leader of the ruling Grand National Party bribed fellow lawmakers in order to win the top position, which is likely to be an irreversible blow on the party’s public image.

Rep. Koh Seung-duk of the GNP voluntarily went to the Seoul Central Prosecutor’s Office on Sunday to face questioning over the bribery suspicions.

The lawyer-turned-lawmaker earlier disclosed that an aide to one of the party’s top leaders handed him an envelope with 3 million won ($2,584) shortly before a leadership vote.

Koh returned the money but the corresponding candidate won the party’s chief post nonetheless, he said.

“I decided to reveal the truth for the sake of sound politics,” said Koh, before entering the prosecutor’s office.

“The GNP may not recover from its current crisis, unless it settles past irregularities.” 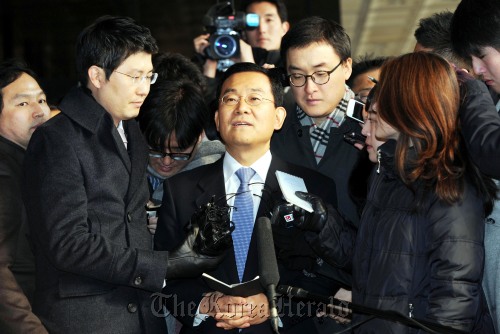 Rep. Koh Seung-duk of the ruling Grand National Party appears at the Seoul Central Prosecutor’s Office on Sunday. (Chung Hee-cho/The Korea Herald)
During the current parliamentary term, three lawmakers have been elected party leader ― Reps. Park Hee-tae, Ahn Sang-soo and Hong Joon-pyo ― but the list came down to Park and Ahn, as Koh excluded Hong, who was the most recently elected.

Eyes were especially on parliamentary speaker Park who became GNP chairman in 2008 through a tight race.

The sixth-term lawmaker, however, denied the allegations and left the country early on Sunday for a 10-day trip to meet with parliamentary leaders from neighboring Asian states.

Also, Kim Hyo-jae, senior secretary for state affairs to President Lee Myung-bak, was presumed by some as the aide who delivered the money to the first-term lawmaker.

The bribery scandal could be another fatal blow to the right-wing party’s struggles to shake off its corrupt image and regain public trust ahead of the upcoming general elections slated for this April.

After questioning Koh, authorities are expected to summon the key figures based on his testimony, according to officials.

Should current and former powers of the GNP be involved in the bribery probe, the ruling party’s reputation will further falter, especially amid the ongoing doubts over the cyber attack on the National Election Commission website.

The prosecution concluded Friday that the attack was carried out by former aides only and did not involve current party members, but this led to violent backlash and scorn from the liberal camp and civic groups.

Reform-inclined members of the party once again demanded that the GNP be disbanded and founded as a new party.

“There seems to be no end to the party’s slump,” said Rep. Chung Doo-un, a leading member among the reformers.

“The only solution is to restart the party from scratch.”

The party’s emergency leadership council has so far refrained from issuing an official stance but some of its members turned in favor of the breakup plan.

However, given the intensity of the situation, the pro-Park group may now also consider dissolving the party in order to shake off the pending doubts, said one of Park’s close aides.

Should the reconstruction take place, the government-ruling party relation is also to undergo radical changes as the Park-led GNP is expected to exclude pro-Lee figures and keep its distance from Cheong Wa Dae.

Observers predicted violent clashes between the two factions, which will negatively affect the right-wing’s chances of winning in the upcoming elections.