North Korea’s leadership, headed by Kim Jong-un, has requested changes in the composition of food aid from the U.S. after his father Kim Jong-il died, Japanese media reported Sunday.

According to the news reports, Pyongyang reopened food aid talks with the U.S. at the end of December, following the funeral of the late Kim.

While some have interpreted the first contact between Pyongyang and Washington since Kim Jong-il’s death as a sign that the two sides will seek more active communication, the request is thought to also reflect North Korea’s efforts to consolidate the younger Kim’s leadership.

In the latest Pyongyang-Washington communications, Pyongyang asked through its United Nations representatives for more rice, corn and other grains in the food aid the U.S. had suggested in an earlier meeting. 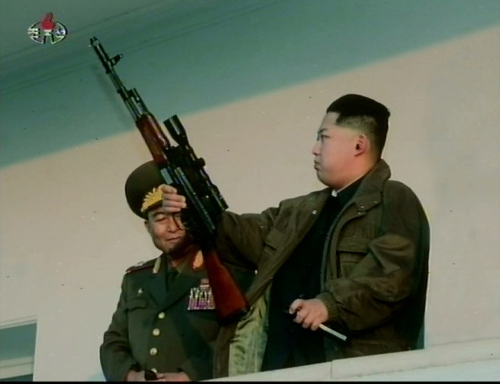 North Korean leader Kim Jong-un (right) is seen holding up a rifle in a still from a film about his activities aired on Korean Central News Agency on Sunday. (Yonhap News)
According to Japanese reports from a number of media outlets including Kyodo News and the Yomiuri Shimbun, North Korean officials made it known that Pyongyang was seeking food stuffs that are “easy to store and can be of help to a wide range of people.”

Regarding the U.S. response, Japanese media reported that Pyongyang’s request was denied but that Washington made it known that additional talks were possible.

U.S. and North Korean officials met in Beijing for a two-day talk on Dec. 15, two days before the death of senior Kim.

At the meeting, the U.S. had suggested providing 20,000 metric tons of “nutritional assistance” including biscuits, powdered milk and vitamins each month for one year to be supplied to children and the elderly, in exchange for the North’s halt of uranium enrichment, AP had reported.

Meanwhile, North Korea marked Kim Jong-un’s birthday on Sunday without special celebrations in light of the recent funeral of his father.

While Pyongyang celebrates Kim Il-sung’s birthday on April 15 and that of Kim Jong-il on Feb. 16 as the country’s largest holidays, Kim Jong-un’s birthday was not marked as such.

In addition, the Gaeseong Industrial Complex operated as usual with the exception of canceling overtime on Sunday, despite the custom of taking the two elder Kims’ birthdays off.