But the 30-year-old had never seriously considered a career in the movie industry until he got a chance to direct his own short film called “Sunshine Manor,” a love story about the relationship between a nursing home patient and her doctor.

“It takes a lot of patience, and time is your worst enemy,” Donoghue said of his directorial debut. “I’d rather build sets than be a director, but the experience is going to benefit me when I try to get an interview.”

Donoghue, who was diagnosed a few years ago with a form of high-functioning autism, was among nearly two dozen special-needs crew members who worked on “Sunshine Manor.” The film was shot over three days in Burbank this summer as a class project for a 20-week course offered by Inclusion Films.

Founded by Joey Travolta, older brother of actor John Travolta, Inclusion Films trains adults with developmental disabilities in the nuts and bolts of filmmaking ― from writing the script to building sets and using film and editing equipment ― with the goal of finding them jobs in the entertainment industry or some other field.

Students with autism, cerebral palsy and Down syndrome are trained by working cinematographers, set designers, actors and other professionals who are active in the industry.

“The filmmaking process is a great teaching tool about life,” said Travolta, 61. “A lot of our students aren’t going to be filmmakers and may never work in the film business, but they are going to be able to go into the workplace and have a sense of what it’s like to be on the job. This builds their self-confidence.” 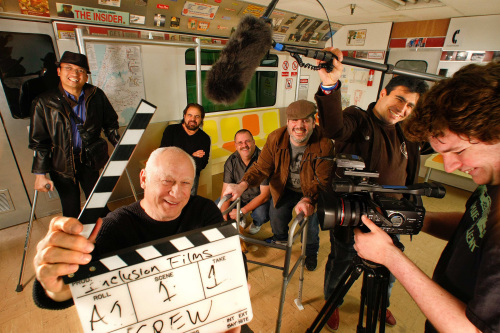 Joey Travolta, foreground left, founder of Inclusions Films in Burbank, is photographed with his students last month, on a set built by the students for a short film production called, “Love on a Train.” (Mel Melcon/Los Angeles Times/MCT)
Based in Burbank, Inclusion Films works with Easter Seals of Southern California to provide jobs to graduates of the program and is in discussions with various studios to set up internship programs for the students, Travolta said. Many of the participants are referred by the nonprofit regional centers that contract with the California Department of Developmental Services to provide job training and other services for special-needs people.

“We’ve seen phenomenal things happen with the students in this program,” said Mike Clark, executive director of the Kern Regional Center, which in the last three years has referred about 70 students to Inclusion Films’ program in Bakersfield. “They see themselves as people who can do something with their lives.”

Travolta launched the Burbank business in 2006 after a long career as a singer, actor, director and producer. The Englewood, N.J., native briefly worked as a special education teacher in New York before embarking on a singing career in 1978, performing on variety shows such as “American Bandstand” and “Donny & Marie,” the show starring the two Osmonds.

Travolta went on to act in movies such as “Beverly Hills Cop III” and “Oscar” before shifting his attention to writing and directing his own movies, including “Enemies of Laughter” starring Peter Falk and the comedy “Partners.”

The idea for Inclusion Films happened almost by accident. Travolta was helping his daughter organize a film festival at her high school.

After reading a newspaper article about his involvement in the school film festival and his acting workshops for children, the mother of an autistic teenage boy named Taylor Cross asked if he could help her son make a film about being autistic. Travolta mentored the boy and together they made the 2006 documentary “Normal People Scare Me.”

After his experiences working on the documentary, Travolta began to teach film to other autistic children at camps.

“I found my calling,” he said. “This allowed me to merge two things that I really love: filmmaking and working with special-needs children and adults.”

With the help of professional instructors, many of whom had worked with Travolta on his earlier films, students take classes in script writing, prop building, editing and cinematography, then apply what they learn by making an actual short film.

One 2009 film called “Spud,” about a 12-year-old victim of neighborhood bullies who reinvents himself as a superhero, was written and directed by Tyler Norman, a student with Asperger’s syndrome.

With the support of Inclusion Films, former student Michael Cooney of Boston launched his own production company, Team Diversity Media, which produces commercials and music videos with students from Inclusion. The company produced a promotional video for Easter Seals and the Chicago School of Professional Psychology.

After receiving a bachelor’s degree from the University of Massachusetts in Amherst, Cooney worked at a radio station but had trouble finding permanent work because of his condition, cerebral palsy. He credits the workshops at Inclusion Films with giving him the confidence and the contacts to start his own business.

“I used to think that disability was something to hide,” said Cooney, who also teaches at the school. “I learned that having a disability is a gift and that I have abilities I didn’t even know I had before I came here.”