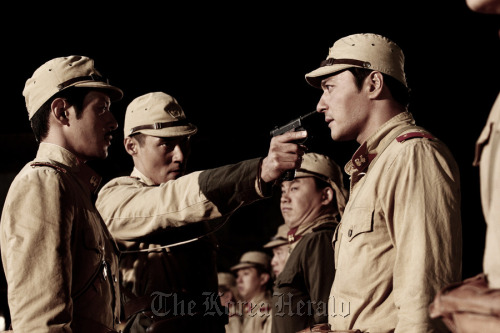 A scene from war epic “My Way.” (CJ E&M)
Korean war epic “My Way” by director Kang Je-kyu will be featured as one of Berlin International Film Festival’s Panorama sidebars this year, the film’s distributor said Wednesday.

Arguably Korea’s largest-ever movie with a budget of $30 million, and featuring an Asian all-star cast including Jang Dong-gun and Odagiri Joe, it spans the battlefield action of WWII from Japan to the Battle of Normandy.

“My Way” is the third Korean movie to be invited to the Berlin fest’s Panorama section ― featuring pieces that have well-blended artistic and commercial value ― following Ryu Seung-wan’s “The Unjust” and Hong Sang-soo’s “Woman on the Beach.”

“It is a great honor to be invited to the festival,” director Kang said via CJ Entertainment’s press release. “I hope the movie carries a certain message to the audience around the world.”

Other promising titles in Panorama’s typically eclectic lineup this year include “Exils,” a documentary featuring an illegal immigrant in France by director Tony Gatlif, and “Stranger,” directed by Malgoska Szumowska and starring Juliette Binoche.

The full Panorama line-up will be announced by late January, according to the festival’s website.

The Berlin film festival, considered one of the world’s three most influential competitions for moviemakers and actors, will be held for 10 days starting Feb. 9.