With Guinness and Westlife among the very few Irish things that have made it to Korea, and the singer’s face rarely shown on TV, a fan of Irish singer Damien Rice may pride him/herself on being “a classy minority.”

Minor fandom, however, is hardly a suitable term for a musician who sold out some 1,600 seats in just a few hours, despite modest promotion activities and relatively expensive tickets priced at 132,000 to 165,000 won (about $150).

In an e-mail interview with The Korea Herald, the Irish singer-songwriter attributed his popularity in Korea and elsewhere around the globe mostly to his devotion and “itch” for music.

“Songs pretty much just happen. I get an urge. I follow the urge. I pick up the guitar. A song pops out,” the 39-year-old musician said.

“It’s almost as if songs fall out of the sky like acorns from a tree and hit me on the head. If too many fall at the same time, my head begins to hurt,” he said. “Some blossom and others sit and hibernate for long periods. There are no rules that I’ve noticed.”

Raised in Celbridge, County Kildare, Ireland, Rice first came to prominence in his homeland as the lead singer of rock band Juniper, which he left after two singles in the late 1990s.

With the reason for his departure reportedly boiling down to a battle with music producers who felt the band’s music needed to be more “radio-friendly,” Rice left for Tuscany, Italy to ― uncharacteristically ― grow lettuce and tomatoes while busking with his guitar along the way.

The unusual journey, however, appears to have served as a well-worth investment for the artist, who returned to Ireland in 2001 to begin a solo musical career that has not only earned him fame but also a considerable amount of money.

Rice released his second album “9” in 2006 and his songs have appeared in numerous films and television episodes.

In Korea, Rice is perhaps best-known for “The Blower’s Daughter,” off his debut album and featured in the 2004 film “Closer.” 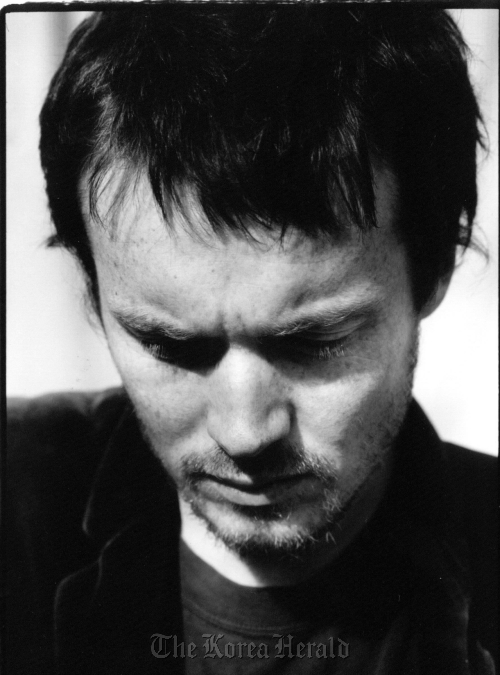 Irish singer-songwriter Damien Rice (Robbie Fry)
“It was a novelty for me at the time,” he said, adding “Closer” director Mike Nichols and agent Bryan Lourd had been “very kind” during the whole exchange.

Also known among music devotees as a “philosopher,” Rice is well-noted for writing lyrics with poetic and philosophical touches.

For instance, in his song “Cannonball” ― featured in various TV dramas in Korea including KBS primetime “Spring Waltz” ― Rice sings about the natures of life in which “love lies, life dies, stone flies and cannonballs fall.”

Like melody, lyrics also come by naturally, the songwriter said.

“Imagine a man who sells apples at a little market. He comes along and puts the apples in a big basket and people ask ‘Your apples are very round and colorful, why is this?’ He replies ‘That’s how they come off the tree,’” Rice replied in a metaphor.

The musician also said “perceived enemies” were the greatest inspirations for his musical career.

“It’s the people who get under my skin that are the greatest catalyst for the birth of a good song,” he said.

Rice, known as a “man of few words,” especially when it comes to media, has taken part in various campaigns based on his beliefs.

He played part in the campaign to release Burmese democracy movement leader Aung San Suu Kyi through the Freedom Campaign, the Burma Campaign United Kingdom and the U.S. Campaign for Burma. He also contributed to the 2008 album “Songs for Tibet”, which supported the Dalai Lama.

The singer did not disclose details of his new album, only saying “there’s an urge to play.” But as another good news for his Korean fans, Rice released a special “Korea tour edition” of his album “Live fro the Union Chapel.” The ninth track “The Rat within the Grain,” is being introduced to Korean fans for the first time.

Rice expressed good anticipations toward his first concert in Seoul, which will be held on Jan. 11, although he has “yet to know” much about Korea.

“A good song is the catalyst for a great adventure,” the singer said.

Rice will be performing some of his favorites including “The Blower’s Daughter,” “Cannonball,” “9 Crimes,” “Elephant” and “Rootless Tree” as the fifth musician to perform in the Hyundai Card Culture Project for international artists.