Gustav Klimt, born on July 14, 1862, is one of the best known figures of the Jugendstil art period.

In honour of this milestone anniversary, Vienna’s biggest museums ― led by the Belvedere, the Albertina and the Leopold Museum ― are proposing no less than nine exhibits during the course of the year, all promising new insights into the artist’s life.

“More works by Gustav Klimt will be on display in Vienna in 2012 than ever before: from his decoration work in the Burgtheater and the Kunsthistorisches Museum to his largely unknown drawings and world-renowned paintings like ‘The Kiss,’” Vienna’s tourism board has already advertised. 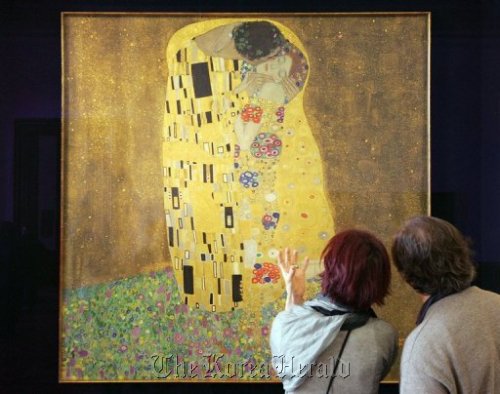 Visitors look at Gustav Klimt´s painting “Der Kuss” (The Kiss) in Vienna. (AFP-Yonhap News)
Klimt, the co-founder of the turn-of-the-century Secession movement and one of Austria’s key modern artists alongside Egon Schiele and Oskar Kokoschka, was the second of seven children born to a gold engraver and his wife in Baumgarten, near Vienna.

Already as an art student, he founded an artists’ company with his brother Ernst and a friend, taking on major commissions to decorate luxurious salons and create theatre sets.

Although his work adorns the walls and ceilings of prestigious Viennese institutions like the Burgtheater and Kunsthistorisches Museum (Art History Museum, KHM), Klimt is best known for his later “Golden Period” paintings.

One of them, the 1907 “Portrait of Adele Bloch-Bauer I” briefly became the most expensive painting ever sold when it changed hands in the United States in 2006 for 135 million dollars (104 million euros).

Earlier, it had made headlines due to a lengthy dispute between the Belvedere ― home to the world’s largest collection of Klimt paintings, including “The Kiss” ― and the family of the portrait’s previous Jewish owner, who said it had been stolen by the Nazis.

The “Portrait of Adele Bloch-Bauer I” was eventually handed back to the family after the Austrian state refused to buy it.

To celebrate Klimt’s 150th birthday, the Belvedere has planned an extraordinary exhibit, with its entire collection of Klimt paintings going on display from June 15 until January 2013.

A separate exposition on the artist’s collaboration with architect Josef Hoffmann, another Secession co-founder, is already running until March 4.

The Albertina will focus on Klimt’s drawings, while the Leopold museum is promising “Gustav Klimt ― Up Close and Personal,” exploring his private life through his letters.