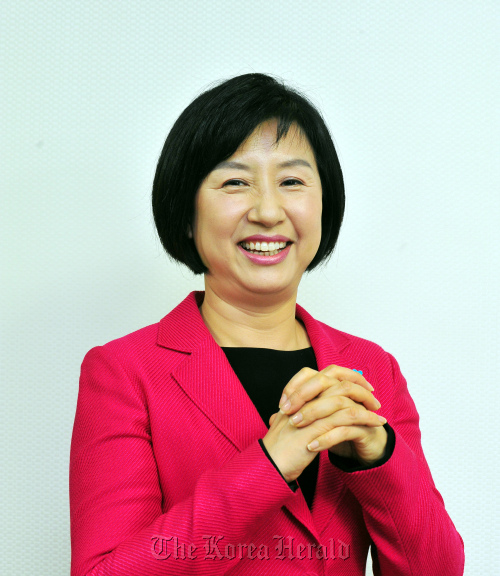 Rep. Bae Eun-hee
This is the fourth in a series of interviews with first-term lawmakers. ― Ed.


Politics is about turning theory into policy and thus dreams into reality, says a biologist-turned-lawmaker.

Rep. Bae Eun-hee, before joining the ruling Grand National Party in 2008 as a representative chosen by proportional representation, was chief executive officer of Regen Biotech, a biotechnology venture company.

“I never thought of myself as a politician before I heard President Lee Myung-bak say that policies must be based on the experience of people in various expert fields,” she said.

“It was then that I shook off the years-long preconception and regarded him as a true politician, not just as a businessman.”

Encouraged by his remarks, she decided to represent fellow scientists, businesspeople and mothers in Parliament, she said.

“I wanted to speak out for small firms and ordinary people, as well as for scientists who suffer from a low level of government support,” the lawmaker said.

“Citizens, scholars and businesspeople may suggest ideas but it is only when such ideas are legislated that they become a reality.”

Her position as a proportional representative, with a nationwide constituency, also enabled her to focus on legislative activities, she added.

“I was not much bound by the fact that I was a novice member with little political experience,” the first-term lawmaker said.

“As a former scientist and venture executive, I found a unique role for myself within the parliament.”

Rep. Bae also served as the party’s spokesperson until early this year.

“Despite its public image as a conservative party, the GNP is in fact actively promoting a wide range of people-friendly policies,” she said.

“The dilemma for the party is that its communication with the people has tapered off.”

During her year as spokeswoman, Rep. Bae gained attention for her courteous tone and informal speaking style.

“My idea was to speak like an ordinary citizen, as a spokesperson’s key function is to deliver the party’s message to the people effectively,” the lawmaker said.

“Parties tend to make edgy remarks at one another competitively through their spokespersons,” Bae said.

“This is a vicious circle which should be eradicated for our politics to develop to a higher plane.”

After stepping down from the post in July, the lawmaker shifted her focus to her parliamentary activities, including the education committee and a research forum.

“I am a mother, too, so I feel a sense of responsibility to speak for fellow mothers who are concerned over the health and safety of their children at school,” she said.

She submitted a number of school-related bills, including one to reinforce schools’ security systems and another to require the disclosure of all allergy-inducing ingredients on school meal menu.

The former businesswoman is also a leading member of the Advanced Politics and Economy Forum, which has been selected as the best parliamentary research group for the past three years.

“The forum was established with the aim of brainstorming innovative policies on major issues, such as the aging population, low birth rate, tax cuts, technology development and many others,” Rep. Bae said.

“The fact that over 40 percent of its proposed bills have been legislated proves that the discussions are fruitful.”

The former scientist said that the parliament should expand its human resources.

“The government and the parliament so often underline the importance of natural science and engineering in the country’s development, but yet lack a sufficient pool of experts,” she said.

“Only 12 percent of the GNP lawmakers have science backgrounds, which is a low figure compared to those who came from legal, administrative or economic circles.”

While occupied with the assembly’s year-end meetings and the preparations for next year’s general election, Rep. Bae recently received the public spotlight by appearing in a televised debate program.

Earlier this month, she spoke as the right-wing panelist against former liberal lawmaker Chung Bong-ju, one of the hosts of a popular anti-government podcast program “Naneun Ggomsuda.”

The given topic was whether the program is a form of guerrilla propaganda or a new category of liberal media.

“The program, in order to be recognized as true media, would first have to double-check the facts before delivering them to the public and make official amendments in case they turn out to be false,” she said in the debate.

Though opinions were divided on the controversial topic, the former spokeswoman was nevertheless acclaimed for representing the conservative camp in a composed and logical manner.