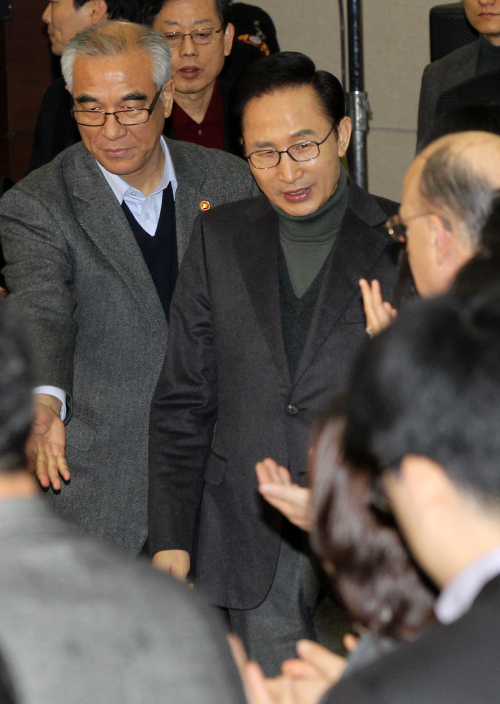 President Lee Myung-bak (right) and Culture Minister Choe Kwang-shik walk into the Korea Culture and Content Agency building, located in Mapo, western Seoul, Thursday. Lee was briefed by the minister on New Year plans. (Yonhap News)
Up to 1.71 million people will receive aid from the government for cultural activities and a foundation for artists’ welfare will be set up next year, as part of efforts to resolve the cultural divide among different social sectors, the Culture Ministry said Thursday.

The ministry released its plans for the New Year as Minister Choe Kwang-shik briefed President Lee Myung-bak along with other cultural organization chiefs.

Some of the plans for 2012 include increasing the number of people who receive cultural vouchers for various concerts, museums and other events. Up to 1.6 million people in the underprivileged household bracket will receive the 50,000 won voucher this year, an increase from the 1.1 million who benefited from the policy last year. Some 48.7 billion won has been set aside for the plan, the ministry said.

The Culture Ministry also plans to increase vouchers for sports events and traveling, setting aside 15.3 billion and 9.6 billion won, respectively.

The ministry will also create some 133 cultural programs for those aged 65 and up, and set aside 800 million won for the creation of sports teams for the disabled.

“We believe it is important to protect the rights of artists to strengthen the overall cultural sector,” First Vice Culture Minister Kwak Young-jin told reporters during a press conference earlier this week.

Through these efforts, the Culture Ministry believes some 7,400 more jobs will be created in the cultural sector next year.