An hour or so before the group known as the Gob Squad hits the stage with its new offering for the Under the Radar Festival, four members will hit the streets armed with video cameras to create their new work, “Super Night Shot.”

They’ll initiate and film some “comic and surreal adventures” that “celebrate unexpected encounters with strangers,” according to the group, a British and German collective.

Their guerrilla films will then be shown as part of that night’s theater event. If they don’t get punched out by irate New Yorkers, of course. Mark Russell, the director of the annual theater festival, isn’t worried.

“They’re pretty charming people,” he says. “They get away with complete murder.”

That quirky show ― mixing performance, theater, film and real life ― is one of dozens of independent and experimental theatrical pieces from across the globe being mounted in lower Manhattan.

The annual Under the Radar Festival features 12 days of shows from nine countries including Argentina, Italy, Japan and Poland beginning Jan 4. The next day, Performance Space 122 kicks off its 25-day annual COIL festival, boasting 10 premieres of theater and dance pieces, including the 2011 Edinburgh International Festival Fringe Prize winner.

There are also 12 workshop performances at HERE’s Culturemart starting Jan. 24, with topics ranging from an absurdist murder mystery to a look at city council meetings. And the Abrons Arts Center is hosting its American Realness festival, with 20 productions over 10 days, including “a portrait of a Swiss woman, battling against her Swiss expectations.”

All the festivals are hoping to take advantage of the estimated 4,000 presenters, producers, vendors, managers, artists and donors who descend on the city for the annual Association of Performing Arts Presenters convention at the beginning of January. 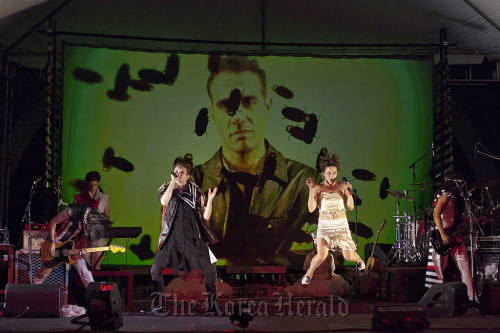 An image released by The Public Theater/Hassan E. Hussein showing a scene from “Goodbar,” running Jan. 4-15 at The Public Theater as part of the Under the Radar Festival in New York. (AP-Yonhap News)
The COIL festival features the U.S. debut of two pieces by Lebanese artist Rabih Mroue, whose work was once banned in his homeland. In New York, he’s offering “Looking for a Missing Employee,” which combines found narrative with projection, and “The Pixelated Revolution,” which examines the role of cellphones during Syria’s recent unrest. There’s also “Newyorkland” by the group Temporary Distortion, which looks at police officers using live performance and film.

PS122 Artistic Director Vallejo Gantner says half the art group’s programming budget is now devoted to the festival, a sign of its increasing significance as COIL enters its seventh year.

“We’re not playing with Tonka trucks anymore,” he says. “This is when we need to make the case that PS122 is the place to discover this kind of work and we’re prepared to put our energy and our resources where our mouth is.”

One of the highlights of the Under the Radar festival is a show that even one of its creators has a hard time describing: “Goodbar,” a collaboration between the glam-punk band Bambi and the downtown theater company Waterwell that blurs the boundaries between music and theater.

Visitors will see Bambi perform and act out their concept album “Goodbar,” based on the 1975 novel “Looking for Mr. Goodbar,” while a gigantic movie screen behind the band projects images to keep the narrative flowing. Think David Bowie-meets-Lady Gaga applied to the story of a woman searching for love.

“It’s a good sign when it’s hard for us to describe,” says Arian Moayed, the artistic director of Waterwell and a versatile actor who starred in “Bengal Tiger at the Baghdad Zoo” opposite Robin Williams and the Public’s recent “King Lear.”

Having the work, which has been evolving over the year, accepted by The Public Theater is a privilege, says Moayed. “It’s been a dream of ours to be in Under the Radar,” he says. “We’ve always been, ‘That’s kind of like the cool club. Why can’t we be in the cool club?’”

“Artists are refusing to limit themselves. They’re thinking in ambitious, interesting ways with a readiness to use every medium available to them, whether that’s video or movement or the body or text or the voice or YouTube or whatever.”

Russell says video has other benefits in addition to storytelling, particularly the ease of touring: “Moving sets is hard; moving video is easy.” Projections also allow producers to translate foreign-language shows using supertitles. “Seeing these performances used to be very clunky,” he says. “But now it’s much more like seeing a foreign movie and it’s great.”

“I’m always interested in finding those overlooked voices ― the people without a platform,” says Russell. “And I think that’s where theater actually makes the most sense.”