This is the eighth in a series on up-and-coming Korean filmmakers. ― Ed.


For anyone who has seen Park Chul-soon’s feature debut “Lovable,” a moving portrait of a young girl with Savant syndrome, it wouldn’t be surprising to discover the director full of playfulness.

The 28-year-old’s debut, which won the best screenplay prize at Persons with Disabilities Film Festival this year, is filled with childhood desires and imaginative adventures. Just to name a few, the movie’s young protagonist places her melting snowman in the fridge, throws rice-mixed milk in the air as if the liquid were snow and doodles on each and every wall of her town.

And the making of such a whimsical portrayal was easy to do for Park, because he, too, was one curious child. Almost everything that the film’s main character “Da-seul” does is based on Park’s real-life childhood experiences.

“I was so sad that my snowman was melting away,” Park said during an interview with The Korea Herald in southern Seoul, Friday, with an impish grin. “So my mom put it in the fridge for me. And then I completely forgot about after two weeks. I was reminded that it was still there about a year later. It had just become one chuck of ice, without the initial shape. I felt really bad, so I put it in a bucket and let it melt under the sun. Then I poured the water into my flower pot.”

Park particularly remembers one incident from his childhood, which he still is fascinated by to this day. “A group of my friends killed a lot of frogs just for fun one day,” he said. “I was just there watching them doing it. Many grown-ups would say, oh, they are doing such things because they are children and they don’t know much. But when kids kill those little things, they do it in the cruelest way possible.” 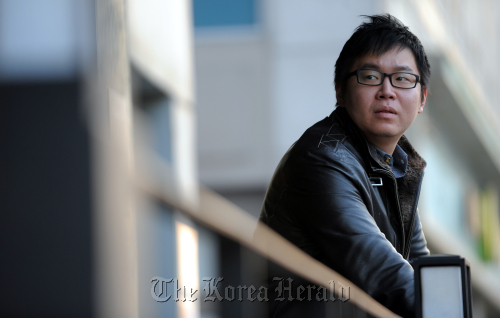 Director Park Chul-soon prior to an interview with The Korea Herald on Friday. (Ahn Hoon/The Korea Herald)
When his friends left, young Park buried the dead frogs by himself and prayed for them. What’s fascinating is, he said, that he went back a few days later and dug up the grave because he was curious how the dead frogs turned out. He saw the decaying frogs, prayed for them, and then buried them again.

“I repeated doing that a several times,” Park said. “And to this day, I have no idea why I did such a thing. The particular incident makes me wonder about childhood innocence and its embedded cruelness, and eventually I wondered about the theory that human nature is fundamentally good. I very often get inspired by my own childhood and some of the powerful, vivid images I saw during the time.”

And his debut film, “Lovable,” is a “letter of apology” to his childhood friend, Park said. He met the friend, who had Savant syndrome, when he was in fourth grade. Though he had an innate difficulty in speaking and learning, the boy was simply exceptional at math, Park remembers. “He would just stare at the questions for a few seconds and write down the answers,” Park said. “And the answers would always turn out to be correct. It was like magic.”

The duo became friends as Park offered to carry the boy’s bag when they happened to walk home together one day. “He was very often bullied at school,” Park said. “I remember visiting his house for the first time. His mother’s voice trembled with so much emotion when she told me to visit any time I wanted, and she’d cook anything I want to eat.”

The betrayal took place when the boys were attending middle school. Park and his friends were following a girl he had a crush on after school that day, and the boy, who wanted to join the group, followed him. “I was embarrassed especially in front of the girl,” Park said. “I told him to get out of my sight with nasty curse words and left. My friends told me that I was “cool” for that. I could hear him sobbing like an animal in pain behind my back. He kept following and I ignored him till the very end. That was the last day of our friendship.”

Park was reminded of the betrayal when he was in high school, as he was all of a sudden bullied by his close friends over a trivial matter.

“The experience and the sense of guilt really haunted me throughout my life since then,” he said. “I had no intention on being vocal about the rights of disabled people when making this movie. It’s just a film. All I want is people to recognize what kids with Savant syndrome are capable of, instead of simply feeling sorry for them.”

Park’s young character is played impeccably by child actress Yoo Hae-jeong. Park lived with Yoo and her family in their Paju house prior to shooting the film. The two took many jaunts to the zoo, as it was Yoo’s favorite place. “I reminded her of the body movements of certain animals when giving her directions,” Park said. “The way she repeatedly shakes her back in the movie is similar to what gibbons do in real-life.”

Park is planning to make a noir thriller for his next film. “If we human beings were a rainbow, I think we only get to show two of our seven colors throughout our lives,” he said. “Perhaps we repress them, or we don’t want to show them. But I want to show them all ― all seven of them ― through my movies.”