The magazine, Zayzafouna, published an article in February written by a teenage girl who presented four role models: a medieval Persian mathematician, a modern Egyptian novelist, the Muslim warrior Saladin and the Nazi leader.

UNESCO said in a statement it “strongly deplores and condemns” the “unacceptable” material and would cease funding the magazine. UNESCO said it funded three different issues later in 2011, and not the one in question.

The magazine also receives funding from the Palestinian Authority, the Western-backed Palestinian government in the West Bank. 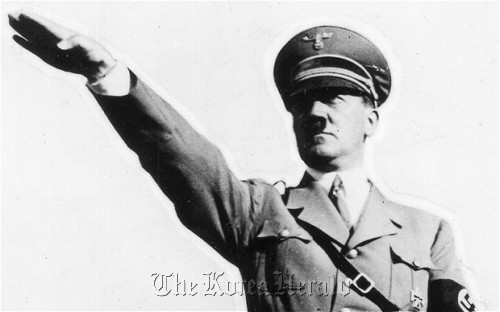 A picture of Hitler published in Zayzafouna
In the article, the author has Hitler telling her in a dream that he killed Jews “so you would all know that they are a nation which spreads destruction all over the world.” He advises her to be “resilient and patient concerning the suffering that Palestine is experiencing at their hands.”

“Thanks for the advice,” the narrator replies.

A translation was made public by Palestinian Media Watch, an Israeli organization that tracks incitement in Palestinian media.

The magazine’s director, Shareef Samhan, did not dispute the translation, though he said the girl was “accusing” Hitler and not praising him. He said he had not been aware of the text and noted that UNESCO was not a central backer of the magazine.

He defended the publication. “We depend in the content of our magazine on the participation of school students, and it’s not our job to prohibit the freedom of speech,” he said.

The publication sparked a written protest by the Simon Wiesenthal Center, a U.S.-based Jewish group, to UNESCO, and that protest appears to have triggered the U.N. agency’s decision and public statement.

UNESCO admitted the Palestinians as its 195th member in October, prompting the United States to cut off its funds to the agency. As a result, UNESCO was forced to scale back literacy and development programs in countries such as Iraq, Afghanistan and the new nation of South Sudan.

“UNESCO strongly deplores and condemns the reproduction of such inflammatory statements in a magazine associated with UNESCO’s name and mission and will not provide any further support to the publication in question,” read the statement issued from the agency’s Paris headquarters.

The statement also said UNESCO “is deeply committed to the development and promotion of education about the Holocaust.”

A spokesman for the Palestinian Authority, Ghassan Khatib, said the article was “not acceptable.”

“We educate young people in our textbooks about the Holocaust and the massacres of Hitler against Jews and against others, and we refer to these massacres as crimes against humanity,” Khatib said. “This instance is exceptional, and the editor will try to be more careful in the future.”

A U.S. group, the American Gathering of Jewish Holocaust Survivors and Their Descendants, released a statement praising UNESCO’s decision.

“As victims of the horrors of Nazi brutality, we learned with deep shock that a Palestinian children’s magazine could approvingly speak of Hitler’s extermination of Jews as an example to be emulated. This was monstrous and grotesque,” the group said.