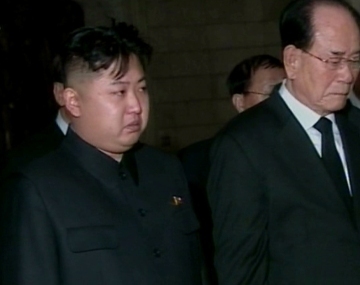 
North Korea officially proclaimed the beginning of the Kim Jong-un era on Thursday, defining the third, youngest son of its late leader Kim Jong-il as “successor of its revolutionary undertakings and leader of its people.”

An editorial on the front page of Rodong Sinmun, the official daily of the North’s ruling Workers’ Party, said he should steadfastly move forward on a path of the Juche (self-reliance) and military-first revolutions while “keeping teachings from Kim Jong-il.”

“The leadership of comrade Kim Jong-un is a definitive guarantee that would take over the Juche revolutionary undertakings, and brilliantly succeed and complete them,” said the editorial carried by the official Korean Central News Agency.

“We should unite around great comrade Kim Jong-un and faithfully follow his leadership.”

North Korean authorities have announced to the public and outside world its national policies and visions through the daily. Thus, experts say that the editorial, entitled “Great comrade Kim Jong-il will live forever in the hearts of our military and people,” is intended to announce the start of the new leadership.

It is also the first time for the North to indicate that he would rule the communist state based on teachings left by Kim Jong-il, who the North claims died of a heart attack on a train ride on Saturday.

Jong-un current serves as vice chairman of the party’s Central Military Commission. But he has yet to acquire a top position in the country’s supreme decision-making organ National Defense Committee, making his grip on power uncertain.

“The editorial presages the start of the Kim Jong-un era. The North already clearly stated the leadership led by Kim Jong-un in Monday’s announcement of Kim’s death,” said Yang Moo-jin, professor at the University of North Korean Studies.

“This shows that Jong-un’s leadership will start through official, legitimate procedures. The North appears to be speeding up the process, but this actually shows that the North is confident and well prepared for the new leadership.”

The editorial also called on Jong-un to bolster defense, indicating that he would uphold Kim Jong-il’s military-first principle, which has played a crucial role to bring its people together under chronic economic travails.

“We should highly value comrade Kim Jong-un’s military-first leadership and should preserve our socialist system and achievements of our revolutions through bolstering our defense power in every way,” it said.

Touching on the North’s long-professed aim to enter the stage of a “strong and prosperous nation” by next year, the editorial stressed that Jong-un should keep the late leader’s teachings and achievements.

“We have our solemn ethical duty to realize our general’s (Kim Jong-il’s) aspirations for the establishment of a strong nation. “Holding tightly to his teachings, we will definitely establish a strong nation that this earth, sky and world would look up to.”

Yoo Ho-yeol, North Korea expert at Korea University, said that the editorial shows the North’s intent to present that there will not be any power vacuum in the aftermath of Kim’s demise.

“This appears intended to present to its people and the world that (Jong-un) as a de facto leader will rule the state without any vacuum. (As the paper is read by the general populace), this would have the effect of educating its people,” Yoo said.

“The North also looks in a hurry with regard to the leadership change. Kim Jong-il had top positions in the military and the party and much power when he took power from his father. But Jong-un does not. By making it a foregone conclusion that he will lead the state, the North apparently seeks to solidify the power transition process.”

Some experts painted a positive outlook for the third-generation succession process in the reclusive state.

“I believe it will about as smooth as the transition was from Kim Il-sung to Kim Jong-il, but actually perhaps better, because during that period North Korea experienced a very serious and traumatic famine. So in some ways, the transition to Kim Jong-un may be even more successful in this regard,” said Patrick M. Cronin, senior advisor and senior director of the Asia Program at the Center for a New American Security.

“This does not mean that there will not be any internal struggles, such as purges, and executions of rival interests. However, overall, I believe that Kim Jong-un will be able to successfully navigate consolidation of his leadership position.”