Sigh of relief. There he is, in the open kitchen of his new ― and long delayed ― restaurant Ink. No other restaurant in recent memory has set the blogosphere roiling in anticipation as much as this one. Voltaggio has some 126,000 followers on Twitter as of this writing and, until very recently, it’s been so difficult to get reservations at the restaurant, it seems every one of those followers is intent on trying Ink at 7 or 8 p.m., cellphone cameras at the ready.

You could be forgiven for wanting to give this buzz-laden restaurant a pass. Some of the other “Top Chef” winners have turned out to be mostly flash and their restaurants a big snore. But Voltaggio isn’t just a pretty face. He’s got the chops. He was, after all, chef de cuisine at the Bazaar by Jose Andres when the Spanish restaurant garnered four stars. And after his wild ride on “Top Chef,” he signed on as executive chef at the Langham hotel in Pasadena, Calif. That turned out to be a mismatch. But it gave him plenty of time to think about what he’d really like to do once he got his own place.

The result is Ink, a casual place with a cozy, but edgy decor and a small plates format. One thing you’d never call Voltaggio’s food is rustic. This is stylized, cutting-edge cuisine more influenced by new techniques and experimental kitchens around the world than by any one place or particular cuisine. Some of it works. Some of it doesn’t quite, but in the end, his food is exciting and very much his own.

Relatively young at 33, Voltaggio has taken the gold ring and grabbed it with both hands. He’s written the book “VOLT ink” with his brother and fellow chef Bryan, whom he competed against in the final rounds of “Top Chef.” And he’s opened not one but two restaurants this year. The first was Ink.sack, a sandwich place just down the street.

At Ink, plates are mix and match, and meant to be shared. Pristinely fresh skate wing arrives in a foamy broth of mushrooms and steel-cut oatmeal ― think of it as a soupy oatmeal risotto ― with delicate, extravagantly perfumed matsutake mushrooms shaved over the top. It’s a subtle and beautiful dish. Halved Brussels sprouts gather under a transparent blanket of house-cured lardo scattered with crisp, curly julienned pig’s ear, a dish that’s playful and fun. 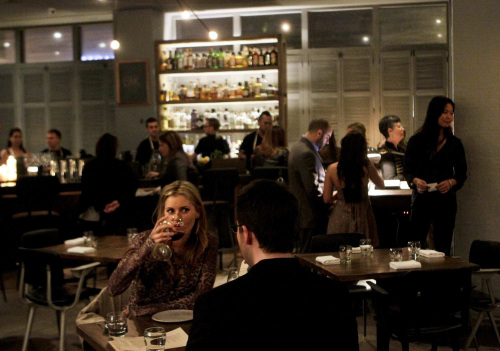 Diners enjoy dinner at Ink, a new restaurant in Los Angeles, California. (Los Angeles Times/MCT)
Octopus comes sprawled on a plate, the tentacles as pink as if they’ve just come from a scalding hot Japanese bath. The texture and taste resemble a seafood sausage, sweet and rich. Underneath is what I’m told is cream of dehydrated potatoes. Rehydrating them seems to concentrate the flavor and I like the puckered texture, but what’s more interesting are the dots of lemon curd, which have a distinct bitterness that plays off the sweetness of the octopus.

Gutsy lamb neck rocks with soft tender yogurt curds strewn with chickpea puree extruded into the shape of fat pencils. He’s calling the dish a poutine, from the Canadian snack of French fries with cheese curds and gravy. A salad of frilly emerald kale with scoops of burrata, roasted pumpkin seeds and a squirt of yuzu hugs the side of the bowl as if it’s been spun in a centrifugal force machine, curling around the void. At the bottom is the surprise of a rich, roasted pumpkin seed butter. This is something I might think about making, but everything else? It would take a page just to describe what processes the ingredients have undergone before they land on the plate.

Voltaggio employs every technique in his considerable arsenal ― liquid nitrogen, hydrocolloids, sous-vide, dehydrating, high-heat roasting, low-temperature cooking, smoking, etc., etc. Cream for the apple dessert is infused with ashes of applewood to give it a weirdly smoky taste.

Not that any of this is on the level of extreme tastes of El Bulli. Voltaggio is smart enough to know that however far he wants to take it, he has to make his food accessible and affordable. He’s calling it modern Los Angeles cuisine.

Some ― but by no means all ― of his food is very wine friendly too. I’d pair a Rhone or Rhone-style white with his seductively rich spaghetti with giant squid. Of course, it’s no surprise the spaghetti isn’t pasta at all, but strands of spaghetti squash tossed with ribbons of squid in a salty sweet hazelnut-squid ink pesto sparked with espelette pepper. It all adds up to a revelatory dish.

Like the menu, the wine list is kept deliberately small, a dozen whites, a couple of roses, a dozen and a half reds, including some older Burgundies and Cabernet blends. Nice choices from general manager and sommelier Josh Goldman, who’s worked at bin8945, Church & State, and with Voltaggio at the Langham.

I enjoyed the sea bass too, with wrinkly shishito peppers and dark green handkerchief pasta imbued with the deep sea-spangled taste of kelp. This is interesting stuff.

But dishes that are merely good or slightly dull ― charred avocado with hen-of-the-woods and whipped fish sauce or big-eye tuna tartare with grapefruit and soy gel ― suffer in comparison with the others. And after a while, I find myself longing for something more than the thin ribbons of romaine and fried Caesar salad dressing croquettes that dress up the fluke crudo. Give me greens. Give me vegetables.

The problem as I see it is that each dish has nothing to do with the other and after five or six of these complex compositions, however delicious, you’re longing for something with the shock of a few intense flavors instead of seven or 17. When every dish has so much going on, the end result can be numbing.

Next to us, a couple study the food, unsmiling, analyzing, critiquing, taking notes. Somebody in the business? It’s hard to tell. Where’s the fun? They’re replaced by another equally serious couple. And still the fans filter in as excited as if they’re going to a rock concert.

Voltaggio’s fame is a burden. He’s a talented and very promising chef but thrust into the hot lights too soon. His fans may be expecting too much. Voltaggio makes every effort to give them fireworks ― explosive flavors, weird textures, amazing juxtapositions and techniques ― but it doesn’t always add up, and sometimes he seems closer to chef as carnival barker.

The dining room, shrouded in gray wood shutters with a bar that juts forward at the entrance, bare table tops and steam-punk lights by designer Clifford Fong, sets up the action for the kitchen.

And it’s a thrilling, giddy ride from plate to plate at Ink. Each meal I’ve had has been better than the one before. I get the feeling he’s a tinkerer, still working toward what he wants. After the new year, he’ll add an omakase bar with eight seats, two seatings an evening. And that, I suspect, will soon be the hottest reservation in town. I, for one, can’t wait.