The Agency for Defense Development (ADD) introduced the Iron Hawk-II surface-to-air missile in a ceremony at its headquarters in Daejeon, about 160 kilometers south of Seoul.

The ADD said it and 15 local defense companies built the missile after more than five years of work. 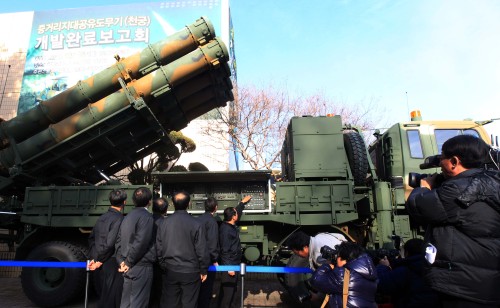 Officials demonstrate how to load newly developed interceptor missiles onto missile launching pads at the Agency for Defense Development in Daejon, Thursday. (Yonhap News)
According to the ADD, the Iron Hawk-II can travel at 10 kilometers to 15 kilometers above ground, with a range of up to 40 kilometers. It has been designed to target North Korean ballistic missiles and fighter jets traveling at a similar altitude. The ADD said the Iron Hawk-II can also intercept air-to-surface guided missiles.

It added the new missile can attack multiple targets with a single radar system and boast better accuracy than other surface-to-air guided weapons currently in operation.

“The multi-functional radar on the Iron Hawk-II can detect and identify enemy airplanes and can also guide the missile toward the target,” the ADD said in a statement. “This will vastly improve our forces’ capabilities in multi-target engagements and in electronic warfare.”

Lee Hee-chul, a senior researcher at the ADD, said the successful development of the Iron Hawk-II proves that South Korea’s technology and development capabilities are on par with other advanced nations.

“In addition to improving our air defense, the missile has given us confidence to further build guided weapons to intercept ballistic missiles,” Lee added.