In a world where communication and interaction are becoming very important, a country like Korea can be an excellent tool in making more people meet and more nations interact with one another, the founder of France-based Korean culture society “The Korean Connection,” said.

“I have many goals in mind with the Korean Connection, but I see Korea more as a tool than a goal,” Maxime Paquet, told The Korea Herald.

“Amazed by how much interest people have for Korea, I saw that Korea could be a good opportunity to make more people meet and make exchanges with each other,” he said. “I feel that one of the world’s main issues today is not money, but communication.” 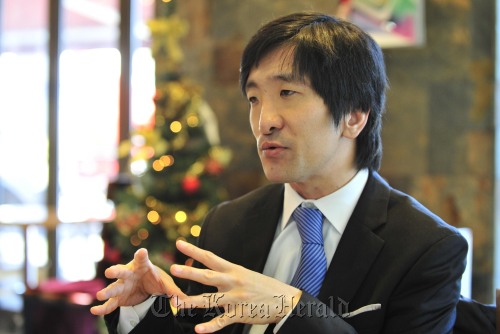 Korean Connection founder Maxime Paquet talks to The Korea Herald in an interview in Seoul, Tuesday. (The Korea Herald/Kim Myung-sub)
The 31-year-old Korean-French received a presidential citation here on Tuesday, recognized for the contribution he made in spreading Korean culture ― particularly Korean pop music ― overseas.

The Korean Connection (www.koreanconnection.org) has been noted for the growing influence it has upon European fans of Korean pop music and musicians.

Tickets for the S.M. Entertainment Paris concert in June, which included groups such as Girls’ Generation and Super Junior, sold out in less than 15 minutes after fans heard about the news via the Korean Connection.

Feeling it has a duty to help more fans see and hear from their idols, the Korean Connection petitioned for a second concert in the French capital.

Having started off with about 10 members, including himself, in February last year, the Korean Connection now has more than 6,000 official members with some 60 staff, Paquet said.

Although the influence of his community is now quite apparent, its founder said he was “a little bit afraid” to be receiving the state award.

“Some people might think we did this for the prize. I agreed to apply for the award only to get the Korean Connection better-known to people. We need support,” he said.

Paquet has been in Seoul since August to arrange and attend the first “Korean Culture Festival Korea Connection 2011,”a week-long event held at the end of August, and to attend a two-month Korean language program at Korea University.

“The language is very difficult but I love the feeling of discovering Korea,” said Paquet, who was adopted by a French couple at the age of 2.

He has been to Korea three times including his current visit, which will last through Jan. 2.

The first Korean band Paquet listened to was Big Bang, which has remained his favorite throughout the years. Having been contacted by the band’s record label, YG Entertainment, as recently as May, Paquet believes he’ll be seeing his favorite band perform in France “sooner or later.”

“Big Bang has a style that mixes European music and K-pop. The European audience will like that,” he said.

“Music in Europe is often too serious, whereas K-pop is fun and unique,” he said. “Korean musicians are also very good at interacting with the audience, compared to musicians from other countries.”

Together with the popularity of K-pop in Europe, people are growing more interested in Korea, its culture and language in general, according to Paquet.

When he went to the Korean Culture Center in Paris to learn the Korean language for the first time, Paquet was very surprised by the composition of the students.

“I was the only Korean adoptee in the class. Most of them were French teenage girls and guys,” he said. “They were very disappointed when I said I didn’t know many Korean TV dramas.”

As he prepares the April 21-22 “Grand Korean Festival” at home in Paris, Paquet said he and the team plan to focus more on promoting Korean comics, animation and TV dramas, which are “less known sectors” in Europe.

“K-pop is already so popular that it no longer needs so much promotion efforts,” he said.