Many acquainted with traditional Korean medicine tend to associate it with herbal remedies, brewed over long periods of time into generally bitter preparations.

Children prescribed those concoctions often resort to all manner of tactics to mask that overpowering taste, using bottles of soda to chase them down, sugar by the spoonful or simply pinching their noses and gulping it down as quickly as possible.

Only upon reaching adulthood do we learn to appreciate this medicine. Bitterness becomes a reassuring affirmation of the healthy components encapsulated in those brews rather than something to wrinkle our faces over.

Rarely, though, do we consider them a recreational beverage, to be enjoyed at the neighborhood tea house with friends. Instead, we go to an oriental medicine clinic, receive our prescription and store the packets of liquid medicine at home, to be taken with scheduled dedication, as one would take one’s pills.

As a result, traditional Korean remedies have tended to stay within the realm of the doctor’s office, though medicinal ingredients have been incorporated, to a certain extent, into dishes and teas.

For Korean medicine doctor Lee Sang-jae, that was not enough. He wanted to make Oriental medicine even more accessible to the masses.

“Western herbs were successfully globalized by being made into herbal teas and aromas that are easy to use,” the 38-year old expert, who is currently teaching at Pusan National University’s School of Korean Medicine, said in an e-mail interview with The Korea Herald

“I thought we should also make our country’s traditional herbs into teas that can be easily used.”

Lee began formulating these teas during graduate school. Then, about three years ago, he opened Tea Therapy, a cafe-style space, in Sinsa-dong.

After settling down and accumulating a steady stream of patrons, Lee opened a second shop in Anguk-dong last October.

“I believe that Tea Therapy’s teas have taken Korea’s traditions and modernized them. Anguk-dong is a place where Korean tradition has been well-preserved, and I found the idea of drinking Tea Therapy’s modernized teas in a traditional, over one 100 year-old Korean building very appealing.” 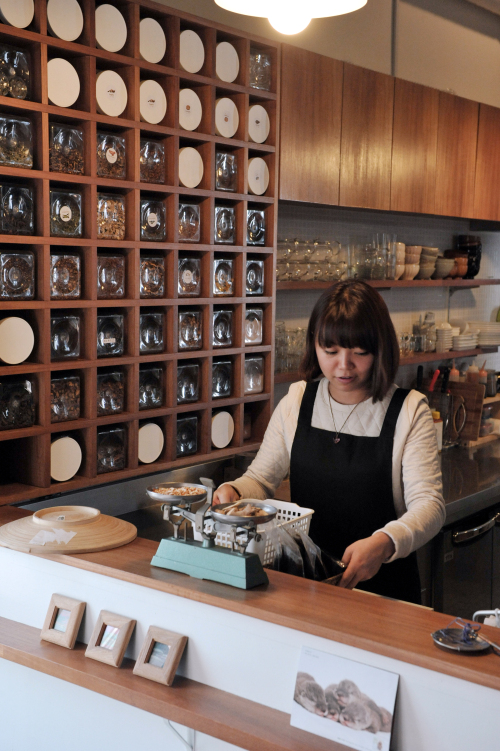 Tea Therapy’s Weight Loss tea marries buckwheat, tangerine peel and Job’s tears in a fragrant brew designed to aid detoxification (Chung Hee-cho/The Korea Herald)
Though Lee is no longer helming the business, which is now overseen by his wife, he currently acts as a consultant. Furthermore, as the creator and founder of the business, he is the man to turn to when it comes to understanding its teas.

“Korean herbal medicine and oriental medicinal teas are very different,” he said. “Though the ingredients we use are similar, medicine is meant to cure illnesses whereas the teas can subdue and control the discomforts our bodies and minds may be experiencing even though we may not be sick.”

In other words, the teas are more like healthy beverages than medicinal pills in liquid form. That is reflected in both concentration and taste.

“For example, if 20 grams (of an ingredient) is used for medicine, then two or three grams will be used for the teas.”

Lee added that he focused on flavor and scent when developing his concoctions, which is why the fragrant brews at Tea Therapy are pleasing to the palate. 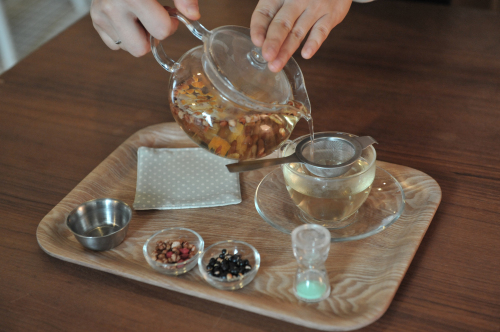 Housed in a more-than-100-year-old hanok, Tea Therapy’s Anguk-dong store captures the traditional vibe of its surroundings with shelves full of Korean herbs and medicinal ingredients that are used to create the establishment’s beverages (Chung Hee-cho/The Korea Herald)
One of the most popular teas, the Weight Loss blend, combines the zingy scent of dried tangerine peel with the toasty notes of buckwheat, while the Stress-Free blend cleanses with the refreshing scent of mint.

While flavor plays a key role, the ingredients themselves are also one of the defining features of these brews.

According to Lee, the Weight Loss tea helps one detox and the Stress Free blend “relaxes the body.”

For winter, Lee recommends drinking cinnamon or ginger teas, which “warm the body.”

“In oriental medicine, both are seen to possess warm properties. They help with our body’s circulation, keeping us warm.”

While the menu provides descriptions of the teas’ benefits, a color-coded chart can be referred to for extra guidance on which brews might be right for you.