The U.S. special envoy to North Korea said in Seoul Thursday that an inter-Korean dialogue was “essential” for the U.S. to move forward in the resumption of the six-party talks.

Glyn Davies, the U.S. special representative for North Korea policy, met with South Korea’s chief nuclear negotiator Lim Sung-nam and other government officials to have consultations on the future course of action, amid efforts to resume the stalled six-party talks.

“We stressed to them (North Korea) the importance of the North-South dialogue. It is a central element of our approach on the DPRK,” he told reporters in Seoul. DPRK refers to North Korea.

He said Washington was not interested in “talks for talks’ sake” with Pyongyang, expecting North Korea to show its seriousness in dismantling its nuclear program.

U.S. officials have had two rounds of exploratory talks with North Korea with the most recent one held in Geneva in October to jumpstart the six-party talks that had been deadlocked since December 2008. 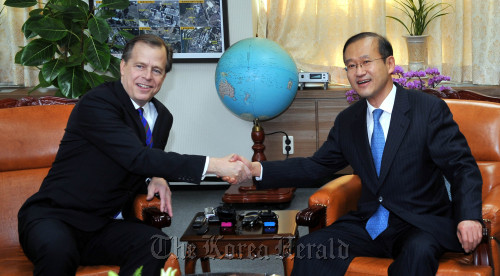 South Korea’s chief nuclear negotiator Lim Sung-nam (right) and Glyn Davies, the U.S. special representative on North Korea policy, have consultations on North Korea’s nuclear weapons at the Foreign Ministry in Seoul, Thursday. (Yonhap News)
“The purpose of those talks is to ascertain, to determine whether or not the DPRK is willing to fulfill its obligations under the 2005 joint statement and under the (U.N.) Security Council resolutions. Those contacts with the North Koreans continue,” Davies said.

“But quite frankly, we are not interested in talks for talks’ sake. They need to indicate to us that they are prepared to take concrete steps to make it worthwhile to get back into the six-party process.”

Asked whether the U.S. would not offer food aid without the North’s promise to halt its uranium enrichment program, he said, “We do not link humanitarian assistance to these other questions that relate to peace and security on the Korean Peninsula.”

Hong Hyun-ik, director of Security Strategy Studies at the Sejong Institute, said the South Korean government should take more aggressive approach in seeking ways to talk with the North.

“If the South misses the right timing, the North might threaten with provocations again. Then, it will be a great loss for the South,” Hong told The Korea Herald.

“Six-party talks should be resumed early next year,” he said.

Davies’ visit to Seoul is part of his nine-day Asian tour. In Seoul, he also met with Foreign Minister Kim Sung-hwan, Unification Minister Yu Woo-ik and National Security Adviser Chun Yung-woo. He will stay in Seoul until Sunday and meet with Japanese and Chinese officials later on.

Separately, Derek Mitchell, the U.S. special representative and policy coordinator for Myanmar, met with Lim and other foreign ministry officials to brief on the results of U.S. Secretary of State Hillary Clinton’s historic visit to Myanmar last week.