Kim chided his soldiers for a series of misdeeds, including stealing military property, beatings among personnel and desertion, according to the documents published in the early and mid 2000s.

They refused to confirm how they obtained them.

To improve the credibility of their research, they conducted a separate survey of 200 defectors who had served in North Korea’s military.

Although the documents suggest that lax military discipline is deepening and undermining soldiers’ loyalty to the autocratic leader, the survey found that it was “not that serious” yet. 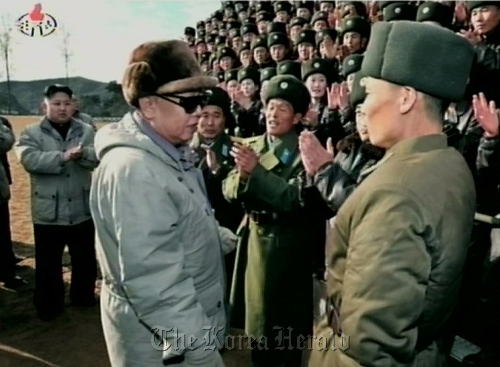 A photo released last Saturday by the North’s Korean Central Television shows the communist state’s leader Kim Jong-il and his third son and heir apparent Kim Jong-un visiting an Air Force unit in a recent series of events to inspect the military. (Yonhap News)
But the book pointed out that under the North’s “military-first” policy, slack discipline could be a serious problem for the impoverished state faltering under international sanctions over its nuclear programs.

“The military-first policy came from the perception that only the military can uphold the regime at a time when the national command system has slackened due to its economic travails,” the book said.

“In order for the military to serve as a last buttress to block the cracks in or collapse of the regime, discipline and military rules should be well established. But it is said that laxity in discipline is at a serious level.”

The book explained that the North’s economic problems, the side-effects of the military-first policy and other internal issues, have contributed to undermining troop discipline.

“The long drawn-out economic difficulties are the definitive factors for all types of slackened discipline. ... Amid economic woes, public confidence in the regime has drastically declined. This has a direct impact on the military,” the book said.

“Under the military-first policy, the socio-political status of the military has risen. In the process, the military has tightened their control on people and exploited them with no mechanism to keep it in check. This, in part, led to such laxity.”

It also said that the mandatory 10-year military service has caused a series of problems including desertions, and that young people who experienced western and South Korean pop cultures, have found it difficult to adapt to strict military life.

The recent survey of 200 former North Korean soldiers, however, found that laxity was not as serious as shown in the documents.

The respondents said that soldiers’ loyalty toward their leader Kim was still strong. For this, they gave an average of four points, with five being the highest score in the survey.

On whether military property was misappropriated, they gave 3.3 points. For the question of whether western and South Korean cultures have entered the North Korean military, the questioned gave an average of 2.31.

“The conclusion based on the survey is that it is not yet at the stage when slackened discipline has a very bad impact on soldiers’ loyalty to Kim, troop morale and ideological armament,” the book said.