[ The Korea Herald – Send E-mail ]
After two decades, a return to Prague in the light of day
By Korea Herald
Published : Dec 2, 2011 - 20:02
Updated : Dec 2, 2011 - 20:02
PRAGUE ― Unlike cities such as Salzburg, which are lucky to display the Baroque in small clusters, Prague opens the Baroque onto the visitor like the spread of an eagle’s wings. The Baroque and other architectural styles dating back through the centuries are everywhere in the Old Town of Prague because the city famously survived the cavalcade of European wars virtually intact. And it is a wonder to see ― as long as it isn’t raining cats and dogs, that is, which is precisely what was happening on my free day at a conference that took me to Prague for my first visit in more than 20 years.

Baroque architecture is as dependent on a spectacle of color as the Art Deco of Miami, and color craves sunshine. Under gray skies, the Baroque loses its giddiness, and in a heavy rain, it pouts at you like schoolchildren unable to go out and play. The effect on me in Prague was not helped by the fact that my socks were wet and that, peeking from under my small travel umbrella, I still found tourists blocking all the best views.

I made the best of it, and a highlight of that day for me was at Kampa Park, a gourmet restaurant at the western foot of the Charles Bridge. With a river view and a delightfully unhurried atmosphere, and working with the sommelier, I paired each course with a Czech wine unavailable in the United States. 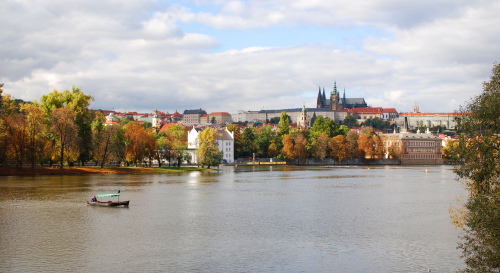 Prague Castle and the Vltava River can be seen in an autumn background. (MCT)
I decided to try again on a dry day, this time with professional help. Wiggling through sparse gaps in the conference schedule, I joined my guide, Monika Ruzickova, for a view of Prague in sunshine.

My hotel, the Inter Continental, was steps from the Jewish Quarter, and Monika, who is half-Jewish and who concentrated on Jewish literature for her PhD in philology from Prague’s Charles University, took me there first. The Old Jewish Cemetery and the Gothic Old New Synagogue (which is the oldest operating synagogue in Europe) were closed for a holiday. From a distance, the cemetery had that ancient, ramshackle look of a breeding ground for storybook ghosts. Not surprisingly, therefore, by legend, the synagogue’s attic stores the now-inert 16 century golem of Prague, a magical community security guard made of river mud who is kept ready to be brought back to life when needed.

On my last visit, Russian troops were still packing up to go home, and Prague was just reviving from the torpor of communism. The people had spirit, as I saw in a huge protest rally staged by ordinary Czechs against a feared return of the communists. Back then there was nothing to buy except apples and strong beer that cost pennies, and I had to use of the last of my Czech money on CDs of memorably awful Czech heavy-metal rock. As Monika and I walked down Parizska Street this time, toward the late medieval astrological clock, we passed the same shops that line streets like Madison Avenue and the Avenue Montaigne, bearing names such as Prada, Hermes and Salvatore Ferragamo.

There were few tourists when I last visited, but now every second person seemed to be herded behind a guide holding an umbrella aloft so as not to be lost in the crowd of other guided herds. The astrological clock chimes hourly, starting with a pull on a chord by an animated skeleton, which sends the 12 apostles into motion, peeking out from behind two windows. It ends with a rooster’s crow, followed by live horn blasts from atop the tower. The legend here is that the authorities had the maker of the clock blinded rather than let him build anything as good elsewhere. That Strasbourg, France, has a clock just as lovely that comes complete with an identical legend suggests that the master clockmakers of old need never have feared for their eyesight. 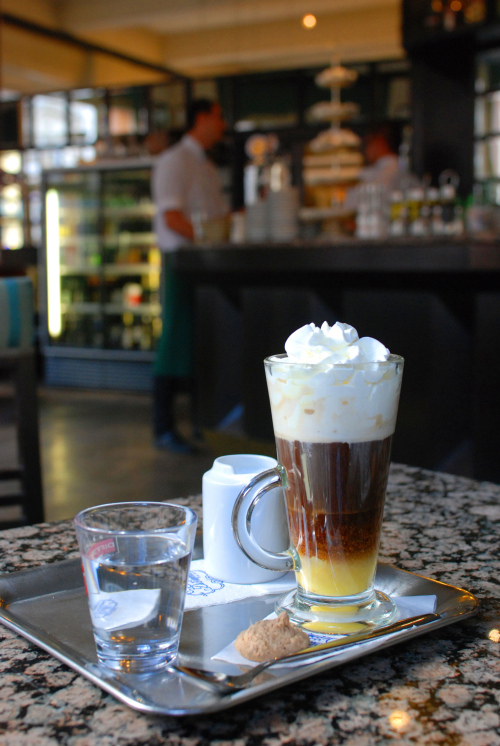 Coffee at Cafe Orient, restored to its Cubist early 20th century appearance. (MCT)
Monika endeared herself to me by taking me down quiet, ancient streets unknown to tourists. She took me for coffee and pastry at the Grand Cafe Orient, which was restored a few years ago to show its stylistic roots in the Cubist movement of the early 20th century. I found the coffee and pastries to be worthy of Vienna, which is the highest praise I can give.

While we were there, Monika called a friend she thought I would like to meet, and the three of us were soon seated for lunch at the Cafe Louvre, which dates from 1902 and was a favorite of Albert Einstein. We dined surrounded by true symbols of the new Czech prosperity: tables filled with business people and with fashionable ladies who lunch. On Monika’s recommendation, for my toddler back home, I bought a plush toy of the Little Mole, a popular Czech cartoon character, and then we headed for the Charles Bridge.

The Vltava River rolled unhurriedly under the bridge, which, with its three towers and its flanking columns of Baroque statues, is one of those utilitarian landmarks that double as an old city’s signature piece of charm. The bright sun shimmered in the tree leaves and glistened off the railings and windows of river steamers. You know a monument has become a worldwide draw when couples come from all over to have wedding pictures made there. I see them almost every weekend in Central Park in New York, where I live, and on a short walk over the Charles Bridge, two couples, in their wedding finest, posed for their hired photographers ― and all the tourists popping off at them with everything from DSLRs to mobile phones.

As in all cities with a castle, the one on the hill above Prague is a big draw, and it comes complete with a cathedral, an ancient street with tiny, Kafkaesque houses (including one in which Kafka actually lived), and decent restaurants. You buy a single ticket and then get it punched each time you visit a new site. As anyone who has seen Venice knows, magnificent cities risk ossification when their treasures become theme parks, but the volume of tourists (not to say more brides and grooms) on the castle grounds probably leave the authorities with few other options, and Prague has a long way to go before it becomes the next Venice.

Guards stand stiffly in sentry boxes outside the castle gate. They try for the appearance of unflinching dedication of British palace guards, but this is Prague, not London. As a troop marched by for the changing of the guard, a soldier’s wavering eye lighted on a pretty woman. “Stop staring,” ordered the officer softly in Czech, and the soldier nervously complied.

My favorite part of the castle area was just outside its grounds. The Sternberg Palace is the city’s Old Masters art museum, and going into it was like stepping into the Central Europe of the 1970s. Great paintings, including an engrossing early Rembrandt (“The Scholar in His Study”), hang together with minor works in old rooms with creaky wooden floors, the canvases dark and in need of cleaning. I felt for a moment as if I were back in the Prague I once knew, the Prague where my lunch restaurant had plenty of beer but had run out half of what was on the menu, the Prague that proudly made do as best it could with whatever it had, hoping for better to come. The fact that better did come gladdens me as have few other things in my recent travels.

Monika said there were more streets off the tourist track nearby, but it was time for me to head back to my conference, which was being held in that spacious and windowless room familiar to conference attendees worldwide. We paused for a final look at the city from the vineyard that borders the castle and headed downhill, toward the river and back to my hotel. On the last avenue before crossing the nearest bridge, a Google Street View car drove by, and people around us responded with waves. It was the perfect way to end a special tour: caught in the act of enjoying the day.

If you go onto “Street View for Prague” and you see a guy in a gray chalk-stripe suit next to a lively young woman in a blue jacket, by all means, wave back.