Niehues, 65, is the man behind the trail map. His hand-painted panoramas have been reproduced into millions of pocket-sized maps handed out by ski resorts in North America, Japan, South Korea, China, New Zealand, Australia, Chile and Serbia.

“His trail maps are as much a part of the sport as snow,’’ said Greg Ditrinco, executive editor of Ski Magazine.

That’s high praise for a fellow whose formal art training consisted of a “learn to draw’’ mail-order course, taken in ninth grade while home sick from school.

Niehues always wanted to find a job that “had a little art.’’ After the Army, he worked as an offset pressman, an ad layout artist and a designer before contacting Bill Brown, who painted the majority of the ski maps in the 1970s and 1980s.

Niehues went to Brown looking for some encouragement, but left with a commission. Brown was moving away from maps and into video, and asked Niehues to take over painting an inset for a Winter Park, Colorado, trail map.

From his start in 1987 until today, Niehues has painted about 300 panoramas, mostly of ski resorts, but also of golf courses, hiking trails, resort property and tourist regions.

His style is distinctive. He paints from an aerial perspective, distorted if necessary to bring a labyrinth of runs and mountain faces into a single plane.

“That’s why I’ve lasted so long doing what I do,’’ explained Niehues. “Every ski slope is a puzzle to me; to turn all those slopes so you can get the best view.” 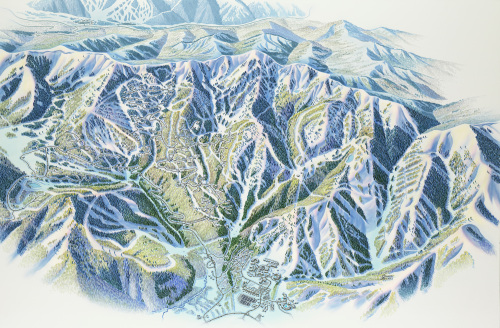 This image courtesy of James Niehues shows a 2011/2012 Canyons Resort, Park City, Utah, trail map by Niehues. (AP-Yonhap News)
Niehues works out of a well-organized basement studio in the modest house he shares in Loveland Park, Colorado, with his wife, Dora, who handles the business end of things.

To craft a map, Niehues researches his subject, checking satellite images on Google Earth, existing maps, blueprints and photographs. Then, whenever possible, he visits the resort, taking photographs from the air while being flown over at various altitudes.

“By the time I get down from the flight I know what perspective I can get to represent the mountain,’’ he said. If he can’t make the flight personally, he asks the resort to supply aerial photographs.

Niehues starts by providing the client with a couple of small sketches, followed by a large pencil on vellum drawing. The sketch time can take from a day to a week, depending on the size of the resort.

Once he gets the client’s approval, he begins painting in gouache, an opaque watercolor, on a 30-by-40 inch prepared illustration board. This method allows him to lift the color and update sections as resorts change over the years.

Small ski areas might require three days of painting, while large resorts require 10, depending on the number of trees. Regional representations can take up to three weeks.

Niehues licenses the image to the client, but he maintains the copyright. His most lucrative job was $13,500 for a regional map, six years ago.

“If there were two really good artists in this business, we’d both starve,’’ he said.

Niehues will sketch one resort while painting another, but he only paints one at a time.

“I tried doing several at a time in my early career. It was Oklahoma but they would end up looking similar and I didn’t like that,’’ he explained.

And that is what Niehues doesn’t like about his nemesis: computers. He’ll use a computer to adjust the color or perspective on a nearly finished map. But in Niehues’ opinion, computer-generated maps lack any character.

“They can’t do what I can do,’’ he explained. “A computer-generated map is obviously computer generated. They have cloned trees; all of them identical.’’

Keeping the panoramas unique is part of what motivates Niehues. He paints some with bright blue skies, others with alpenglow at sunset.

“I try to make each one as different as I can,’’ he said.

“I think I’m getting better,’’ he said. “Now I put indigo in my snow. It gives it more body, settles it down, especially if it has trees on it.’’

Because there are so few projects available - he normally paints 16 to 25 a year - Niehues will take almost any commission. But he won’t relax his standards if a client tinkers with his work.

“I’ve had to occasionally call somebody up after they’ve used a computer program to alter the color or proportions and say, `Take my name off of it. That isn’t how I painted it,’ “ he said.

Niehues still has some mountains that he’d like to paint, and still very much enjoys what he does. At the same time, he’s dreaming of retirement. He’d like to travel the Oregon coast and the desert surrounding Moab, Utah, and paint landscapes he’s photographed over the years.

He’d be happy if one day, someone contacts him like he contacted Brown.

“I’d like to pass the torch,’’ he said. “I think it would be neat if there were still some hand-painted illustrations. But I may very well be the last trail map artist to use a brush.’’