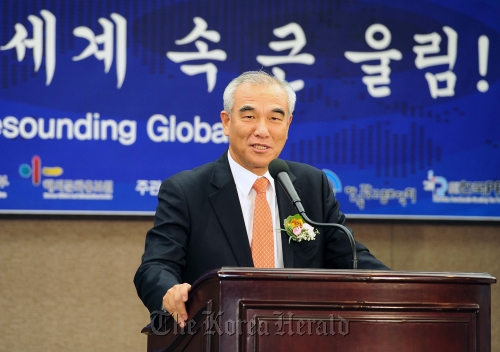 The state-run organization held the seminar to mark its 40th anniversary, aiming to seek new ways to conduct its activities more effectively in the years to come.

The seminar, titled “Reaching out constantly, Resounding globally,” was attended by dozens of experts and cultural figures from Korea and abroad, including Culture Minister Choe Kwang-shik and Korea Foundation president Kim Byung-kook, who shared views on the history and future of Korean culture.
“Korea has tremendous potential especially when it comes to the cultural sector,” said Professor Lee Byung-jong of Sookmyung Women’s University, during the second session of the seminar.

“Because culture is a broad term that includes not only art and music, but education, philosophy, religion and more, I believe cultural promotion should be led by cultural experts, not diplomats,” the professor said, regarding recent debate over which government ministry should be in charge of cultural exchanges overseas.

“We must put our heads together in figuring out what kind of soft power Korea must develop and nurture for the effective promotion of culture and national image,” Lee added, noting the increasing popularity of Korean pop culture overseas.

“What really matters is not the number of projects (KOCIS conducts), but the way they are performed,” he said.

“Korea has many internationally famous firms. It is time for us to work on increasing these companies’ roles in uplifting the national image via forums and mecenat activities,” he said.

Inaugurated in 1971, KOCIS has grown into an organization with 24 overseas offices over the past four decades.

In session one of Thursday’s seminar, Kim Dong-ho, honorary director of the Busan International Film Festival, and Cheon Ho-seon, former director of the Korean Cultural Center in New York, shared their views on the history and the future of Korea’s overseas cultural public relations activities.

In the second session, Choi Sung-joon, the strategic planning director for YG Entertainment, Jung Jae-sook, senior journalist at the JoongAng Ilbo, and professionals from the field discussed strategies to keep the Korean Wave going.

KOCIS will also hold a photo exhibition and publish a book chronicling the organization’s 40-year history to commemorate the anniversary.