Scott Snyder, senior fellow for Korean studies and director for the program on U.S.-Korea policy at the Council on Foreign Relations, also said that as China’s top priority is regional stability, its policy toward North Korea may not change any time soon.

“It is better to have a channel of communication with North Korea than not to have it. Communication helps reduce miscalculation,” he told The Korea Herald.

“So, even if the policy positions of the two governments are very different from each other, I think there is a need for the two sides to be able to communicate. In recent months, it appears that channels have not been working well.”

Regarding the U.S. administration pivoting toward Asia, Snyder said that America’s recent shift in foreign policy may not immediately affect China’s approach to deal with North Korea. 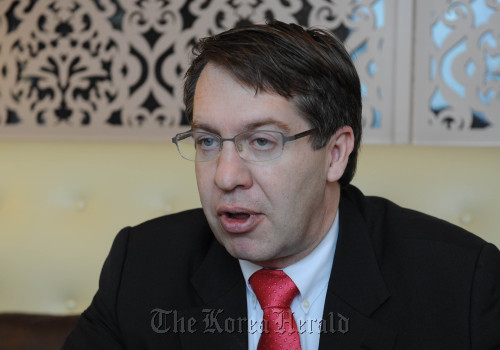 Scott Snyder
“I do believe China cares about whether or not North Korea is a nuclear state, but we all know that China’s priority is stability,” he said.

“If you ask me if the (U.S. government’s) pivot toward Asia is going to change China’s prioritization on North Korea, my answer will be no. I don’t think that is going to happen by itself. The U.S. and China really need to have more active and intensive discussions about how to combine their needs for stability and denuclearization.”

With regard to a flurry of diplomatic moves for the resumption of the six-party talks aimed at its denuclearization, Snyder said that the North is still not responding to the U.S. and South Korea’s demand for preliminary denuclearization steps.

The steps include the return of international nuclear inspectors to its Yongbyon nuclear complex and inspection of its uranium enrichment program. North Korea has demanded that there be no conditions for the talks, which it has sought in a bid to alleviate its economic woes and break its international isolation.

“Essentially what the U.S. is asking for is for North Korea to go back to the situation at the end of 2008,” he said.

“What North Korea is saying is that we want to resume the talks but in order to do that, we have to ignore everything that happened in 2009 and 2010 and it is very difficult for the U.S. and South Korea to simply forget about the activities it has undertaken ― those activities are actually undermining the objectives of the six-party talks.”

Snyder was referring to long-range missile tests, the second nuclear test, the sinking of the corvette Cheonan and the shelling of Yeonpyeongdo, all of which occurred in recent years.

He also said that the recent U.S. moves regarding Burma issues could be a message to North Korea.

“I think most interesting thing that is happening in the Obama administration is Secretary Clinton has gone to Burma, first secretary of state to visit Burma in a decade. So, I do not know the conditions are right for something like that to happen in North Korea, but I think we can see that administration has shown that it is willing to respond in a very active way to very nascent changes in policy.”

“The U.S. is intended to support reform changes in Burma. It shows if North Korea can embrace the kind of reform process that we see in Burma, perhaps the U.S. government is eager to support that.”

North Korea is apparently a pain for China as much as it is for the U.S., he added.

“I think China faces some very severe contradictions in its foreign policy related to North Korea. At some point, it will be in China’s interests to address those contradictions,” he said.