[ The Korea Herald – Send E-mail ]
Six-party talks ‘not effective’ framework for denuclearization of North Korea
By Korea Herald
Published : Nov 30, 2011 - 18:39
Updated : Nov 30, 2011 - 22:47
A renowned U.S. expert in East Asia affairs said on Wednesday the six-party talks framework is unworkable stressing South Korea and the U.S. should not expect too much of China in resolving North Korean nuclear issues.

Balbina Hwang, assistant adjunct professor at Georgetown University, also said that the communist state is unlikely to renounce its nuclear ambitions and will continue to use deceptive means to gain economic concessions at the multilateral denuclearization talks.

“We have to understand that the six-party talks are really a joke. It will never work. Of course, I firmly believe North Korea has to give up its nuclear weapons, but why would they give it up first?” she told The Korea Herald.

Underscoring that China’s influence in dealing with North Korea is “overstated,” she said Seoul and Washington should not put too much weight on China’s role in the denuclearization efforts.

“Obama did not change Bush policy on North Korea. They put too much emphasis on China. They say to China, ‘That it is your responsibility.’ That gives China all that power. I think China’s influence is overstated. Having said that, China is not doing everything it can,” she said. 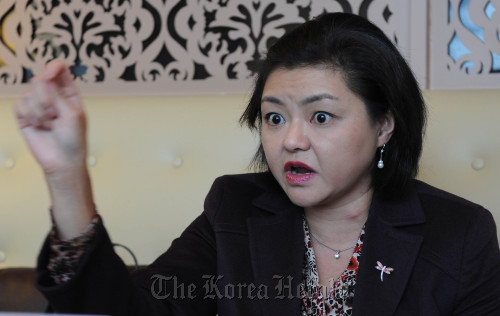 Balbina Hwang
“My point is simply that the relationship between the U.S. and China should not affect North Korea. Yet it does. The only reason it does is because the U.S. keeps saying that China should do more. Actually South Korea does that, which I think is a mistake.”

Saying that security is the main reason for its nuclear ambitions, she insistedthat a formal peace treaty the North has long demanded from the international community is not going to be “enough.”

“It is very reasonable for any state to want to be secure. The problem is that North Korea is willing to go much further than any other states to gain its security and its security demand is unreasonable,” she said.

“Peace agreement? It is meaningless. It is a piece of paper. North Korea will not trust that.”

Given the security threats the North feels from the surrounding military powers, it would hardly renounce its nuclear programs, she noted.

“When they say security assurance what they mean is they want the U.S. bases and forces to be off the peninsula, they want the U.S. to move its nuclear deterrence, not just for South Korea, but for Japan. That means it has to end its alliance with Japan.”

“Let’s just say the U.S. does that. Do you think North Korea would feel secure? They are going to feel threatened by China, Japan and South Korea. Three strongest militaries in the world ― the U.S., China and Russia ― are surrounding North Korea. Why would North Korea give up nuclear weapons first?”

Contrary to rampant speculation here that 2012 will be a tumultuous year in terms of regional security given North Korea’s goal to become a “strong, prosperous state” by then, as well as leadership changes in China and South Korea, Hwang said it would be calmer than expected.

“(In 2012), everybody will look inwards domestically. Everybody is obsessed with their domestic politics ― China, Japan, North Korea and South Korea and the U.S. and Russia, even France,” she said.

“Everybody is relatively cautious and none of those potential leaders wants to deal with international crises. So, in fact, everybody for foreign policy is conservative. They are going to focus domestically. The problem is 2013 because that is when all the new leaders are starting office.”

Concerning what critics here call a hard-line policy by the Lee Myung-bak administration, Hwang said that it is not a problem with a policy in the South, stressing that the cause of tensions is North Korea.

“It is nothing to do with who is the president in South Korea and what their policy is. I completely very strongly disagree about blaming President Lee,” she said.