The Korean soccer ace was appointed as a UNAIDS International Goodwill Ambassador to raise awareness about HIV among young people and help break down barriers of discrimination surrounding the virus.

“People living with HIV are people like you and me,” said Hong during the appointment ceremony at Yonsei University in Seoul on Monday.

“They have rights and should not be discriminated against. I am delighted to be working with UNAIDS to use sport to help bring an end to AIDS.”

He was also the first Asian footballer to receive FIFA’s World Cup Bronze Ball in 2002. 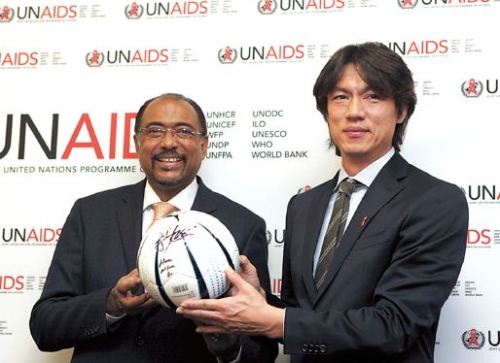 Korean soccer star Hong Myung-bo with UNAIDS Executive Director Michel Sidibé after becoming an ambassador for the organization in Seoul on Monday. (UNAIDS)
“Accelerated efforts are needed on HIV to ensure zero new HIV infections, zero discrimination and zero deaths,” said Jun Byung-Yool, Director of the Korean Center for Disease Control and Deputy Minister of Health and Welfare. “The involvement of a sporting hero as great as Hong Myung-Bo can greatly advance this important agenda and make a difference in the AIDS response around the world.”

An estimated 5 million people were diagnosed with HIV in Asia and the Pacific at the end of 2010, with 4 million of the sufferers living in South and Southeast Asia.

“As one of the greatest Asian football players of all time, Hong Myung-bo will be a compelling advocate on HIV prevention for young people and football fans worldwide,” said Michel Sidib, UNAIDS Executive Director.

Globally, there are more than 5 million young people living with HIV and every day 2,400 young people become infected with the virus. Only one-third of young people globally have accurate and comprehensive knowledge of how to protect themselves from HIV, according to the UN program working to provide universal prevention, treatment, care and support against the virus.

“We are very glad UNAIDS has recognized Hong Myung-bo as both a sports celebrity and a prominent humanitarian.“ said Park Soo-Gil, president of the World Federation of United Nations Associations.

“Mr. Hong has established a great level of influence in football worldwide, and his appointment as the UNAIDS Goodwill Ambassador has great potential to make a critical push against HIV infections and discrimination.”