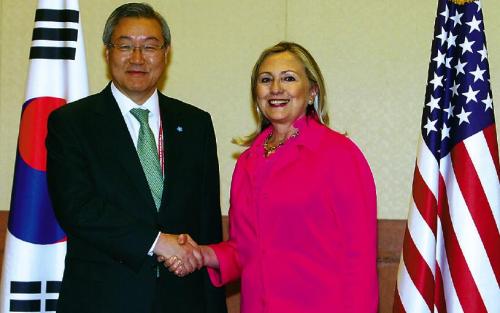 Foreign Minister Kim Sung-hwan (left) and U.S. Secretary of State Hillary Clinton shake hands before their meeting at the BEXCO exhibition center in Busan on Wednesday. (Joint Press Corps)
North Korea announced on Wednesday that its enriched uranium production efforts are “progressing apace,” scoffing at calls from South Korea and the U.S. to halt all related programs.

North Korea has called for an early resumption of the six-party talks without preconditions, but South Korea and the U.S. insist Pyongyang must first take concrete steps to show its sincerity, such as a monitored shutdown of its uranium enrichment plant.

Pyongyang’s Foreign Ministry said that it was speeding up the construction of a light-water nuclear reactor and enriched uranium production as fuel for the reactor, claiming that the projects are for power generation and that the country has the right to peaceful use of nuclear energy.

“The construction of an experimental LWR (light-water reactor) and the low enriched uranium for the provision of raw materials are progressing apace in reliance on a solid foundation of the self-supporting national economy and the country’s latest science and technologies making leaping progress,” the North’s ministry said in a statement carried by the Korean Central News Agency.

“The DPRK announced at home and abroad every phase of its nuclear activities for peaceful purposes geared to the production of electricity,” it said, using the acronym for the country’s official name, the Democratic People’s Republic of Korea.

The announcement was met with immediate calls from the U.S. to stop all related projects.

“The United States stands with our ally and we look to North Korea to take concrete steps that promotes peace and stability and denuclearization,” U.S. Secretary of State Hillary Clinton told reporters on the sidelines of a global forum in Busan.

Clinton arrived in the southeastern city of Busan on Tuesday evening and attended the Fourth High Level Forum on Aid Effectiveness Wednesday morning.

Clinton also reaffirmed that the alliance with South Korea “has never been stronger.”

Regarding the Korea-U.S. Free Trade Agreement that was ratified by the South Korean National Assembly on Nov. 22, Clinton said that it was a “win-win” deal.

Her comments came a day after President Lee Myung-bak signed off on a package of bills needed to implement the bilateral trade deal, finalizing the ratification procedure and bringing the deal closer to effectuation early next year.

Before delivering a speech at the opening ceremony of the event, she met with Foreign Minister Kim Sung-hwan.

The ratification of the trade pact in both nations was “hard work,” Clinton told Kim, calling it a win-win deal.

“I remember one of those sayings that anything worth doing is hard to do,” she said.

The Seoul and Washington governments signed the pact in June 2007 to tear down trade barriers between the long-standing allies.

Following about five months of additional negotiations over unaddressed concerns for both sides, they signed the revised deal in February. The U.S. Congress approved the pact when Lee was visiting Washington last month.

The U.S. state department said in a statement that Clinton’s attending the Busan forum reflected the U.S.’ “strong political commitment to development as a key pillar of global security, prosperity and democratic progress.”