BUSAN ― Abolishing gender inequality is one of the dominant issues and possibly the key in increasing aid effectiveness, according to experts in Busan on Wednesday.

At the Fourth High Level Forum on Aid Effectiveness, dignitaries, including U.S. Secretary of State Hillary Clinton, argued for the increased need to focus on the women’s empowerment in order for efficient economic development. 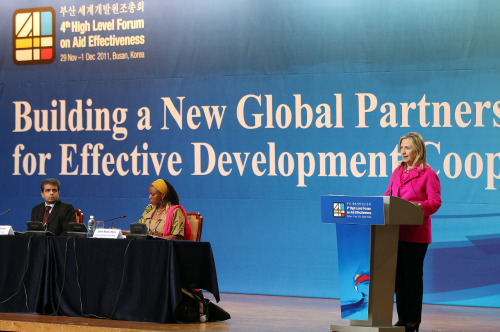 U.S. Secretary of State Hillary Clinton gives a speech at the Fourth High Level Forum on Aid Effectiveness in Busan on Wednesday. (Yonhap News)
“Women in developing countries farm, produce and sell more than half the world’s food and when they are not doing that they are cooking, childbearing, care-giving, finding fuel, carrying water,” said the queen to thunderous applause.

“Development investments in women are among the most effective we make. When we remove barriers to participation and integrate women into the economy, we raise the prospects of whole communities,” said Clinton in an opening speech.

Clinton also pointed out to the delegates and representatives of women’s organizations, the private sector and multilateral organizations that if barriers on women’s economic participation were lifted, GDP could increase up to 14 percent.

The secretary of state also emphasized the need for the quantification of the results of the abolishment of gender inequality, calling it critical to the Busan Action Plan for Gender Equality and Development.

“The Action Plan will help us track our progress and stay on target over the new few years,” said Clinton.

During the session she announced the Evidence and Data for Gender Equality initiative, which will attempt to make statistics on decreasing gender gaps more transparent, adding that five donors have already shown support.

“EDGE responds to the growing demand of countries for financial and technical support to improve gender statistics. It will help harmonize economic data broken down by gender across different surveys and national systems.”

The plan was built on recommendations from the U.N. International Agency and Expert Group on Gender and Statistics.

According to the U.S. State Department, the initiative will be overseen by the U.N. Statistics Division and U.N. Women.

However, not all were on board with the action plan, taking issue with the emphasis on women’s economic development rather than human rights.

The BetterAid Coordination Group and its women’s organizations expressed their lack of support citing “concern about the overwhelming focus on promoting women as vehicles of economic growth, rather than rights holders.”

“What this plan fails to recognize is that there should be ‘power’ in empowerment. We all know that increasing the number of women available in the labor market can be very profitable. But does it result in better development outcomes or rights for women? Not from our experience,” said Azra Sayeed of Roots for Equity Pakistan.

Others echoed the call, saying that commitments that lift up women’s rights are needed rather than economic benefits.

Several women’s organizations, including the Asia Pacific Forum on Women, Law and Development and the Association for Women’s Rights in Development said they would not endorse the plan.

“The current plan does not sufficiently promote the enjoyment of fundamental human rights and substantive equality,” they said in a joint press statement.

According to the statement there is evidence that suggests a purely economic approach could have adverse effects and “exacerbate inequalities and rights violations.”

Kicking off the panel discussion Hans Wijayasuriya, CEO of Dialog Axiata in Sri Lanka said that mobile phones, which he called “the most widely available communication tool,” can be a big key in the development of gender equality.

According to Wijayasuriya, women are 21 percent less likely to have access to a mobile phone, than men.

The Busan Joint Action Plan for Gender Equality and Development is a collection of the commitments made during the forum, and will drive a results-focused agenda.

According to the U.S., the plan will promote gender equality and women’s empowerment by addressing factors behind women’s lower status in economics politics and society.

Gender equality and empowering women by 2015 is one of the eight Millennium Development Goals, agreed upon by all 193 United Nations member state..

Korea, however, is largely regarded as one of the worst environments for gender equality, as the nation’s gender wage gap is more than double that of the OECD. Other studies shows that only 8 percent of women have supervisory responsibilities here, and only one female university graduate is employed per every four male graduates. A little less than 5 percent of the nation’s corporation executives are women.

The three-day forum is the largest event since its Paris opening in 2005, attended by dignitaries including South Korean President Lee Myun-bak and U.N. Secretary-General Ban Ki-moon.