Beginning in the final days of November, the North began making anti-Seoul statements with renewed vigor.

On Nov. 24, North Korea’s Korea Central News Agency reported that the Supreme Command of the North Korean People’s Army would turn Cheong Wa Dae into a “sea of fire” and that the fire will grow until it destroys “the base of the traitors.”

The threat, which came in response to the Joint Chief of Staff’s drill in the West Sea held on the anniversary of the shelling of Yeonpyeongdo on Nov. 23, was the first to use the term “sea of fire” since February. 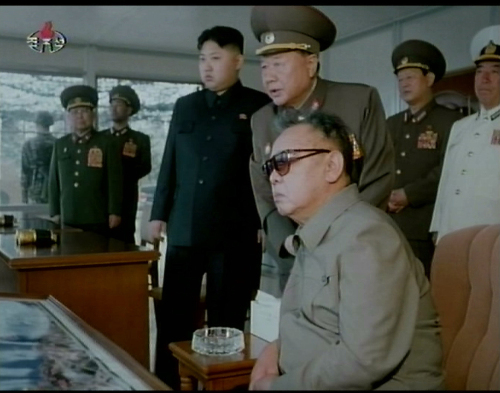 North Korea’s state broadcaster Korean Central Television on Tuesday shows footage of Kim Jong-il and Kim Jong-un watching a military exercise in July. (Yonhap News)
“North Korea could be using words (to express dissatisfaction with Seoul) because there are difficulties in taking action. They have called for inter-Korean talks but the South has added conditions (for talks), so it could be a show of dissatisfaction for such developments,” Dongguk University assistant professor of North Korean Studies Kim Yong-hyun said.

He added that Pyongyang releasing video of the Kim family at a military drill is a response to South Korea’s exercises, since the North is unable to hold a drill every time one is conducted in the South. On Tuesday, the North released footage of Kim Jong-il and his heir Kim Jong-un attending a military drill in July.

On Nov. 25, North Korea criticized Seoul’s North Korean policies saying that its new flexible approach is no different from past “confrontational policies.”

The communist regime followed up with criticism of South Korea on Monday regarding the ratification of the Korea-U.S. Free Trade Agreement. In its latest statement, North Korea criticized President Lee Myung-bak, mentioning him by name for the first time in almost a month.

Although the North has continued to criticize Seoul and its policies, the communist state had maintained a relatively mild tone since the bilateral denuclearization talks held in Bali, Indonesia in July.

Since August, Pyongyang’s rhetoric has rarely mentioned the South Korean president by name. The North’s propaganda became even milder since new Unification Minister Yu Woo-ik began to implement measures to soften relations between the two Koreas in September.

“North has a strategy for creating a critical situation with words, and a strategy for doing it with action. Actions are taken when words have no effect, but at present actions will not be effective,” Kim said.

“They have shown all they have to show with both weapons of mass destruction and with conventional weapons. In addition, the South is ready to carry out large scale retribution if there is any (military) provocation.”