Seoul Mayor Park Won-soon has surprised many with his unconventional steps a month into his new job. He has broken with the strict and bureaucratic image of a mayor and gotten more personal and closer to ordinary citizens.

Park invited a 39-year-old housewife with three kids to be the first one-day citizen mayor on Wednesday. Sitting on “the chair for citizens” in the mayor’s office, she received daily briefings on city affairs and spent the morning and afternoon with Park’s schedule.

Experts say the event was to improve communication with citizens and set him apart from conservative former mayors.

Park is the first civic activist, having won the Oct. 27 by-election. 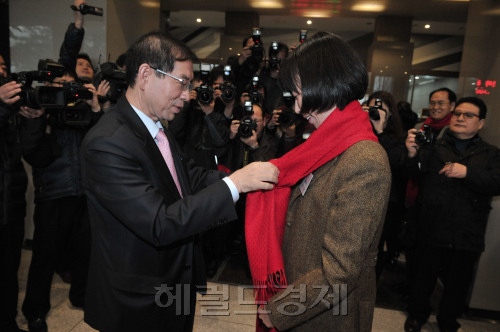 Seoul Mayor Park Won-soon (left) wraps a red muffler around the neck of a citizen Im Eun-seon during a ceremony at City Hall on Wednesday to launch a city project to help the underprivileged in winter. (Chung Hee-cho/The Korea Herald)
“It’s too early to tell whether Park did well or poorly because a month is too short to evaluate anyone,” said Lee Chung-hee, political science professor at Hankuk University of Foreign Studies in Seoul. “But I can say for sure that he is closer to the lives of the common people because he has shown such actions as commuting to the city hall by subway on his first day as mayor. During the past month, he has acted on his motto, ‘citizens are the mayor.’”

But one of his most surprising events was his online inaugural ceremony broadcast live on the city government website.

Park hosted the ceremony and revealed the interior of the office to citizens for the first time in 65 years. He even showed his bedroom and bathroom behind the office. Instead of inviting distinguished guests, he conducted his inauguration with city councilors and employees. He also introduced real-time messages sent by citizens through Twitter and Facebook. He was, in effect, the host of his own show.

Over the past month, about 1,400 tweets on policy suggestions and civil complaints have been sent to Park, who replies to them even late at night and on weekends.

However, some experts and critics say that Park should act more like a mayor, not like the civil activist he used to be.

“Park needs to handle city affairs differently from the time when he was a mayoral candidate. As mayor, he needs to pursue benefits for all citizens including those who didn’t vote for him,” said Lee.

Lee added that Park should exercise broader leadership, embracing those who do not favor his policies and maintain the good policies pushed by his predecessor Oh Se-hoon, such as urban beautification projects.

“What he showed during the past month has been spontaneous, unrefined and unprepared,” said Choi Han-soo, professor at Konkuk University.

Choi criticized Park’s frequent visits to markets and workplaces. He said promising so many things off the cuff while meeting citizens will likely confuse city officials in charge of carrying out policies.

“He did what he’s supposed to do as a mayor (visiting citizens at their workplaces and homes), which former conservative mayors took lightly.”

His frequent visits to every corner of the city are in line with his emphasis on welfare. Park introduced himself as the “welfare mayor” in the online inauguration and increased the welfare budget by 5.9 percent, expanding welfare items up to 26 percent of the total 2012 budget.

He also vowed to set aside part of the city budget to halve the tuition of the University of Seoul, a public university funded by the city, as a way to respond to college students’ demand for “half tuition.”

Expectations are high for the new unconventional mayor as some citizens firmly believe Park will “make the city a wonderful place and make citizens happy,” according to a Twitter user, but the impact that Park will have on the political landscape in Korea is also being anticipated by political experts.

“Park’s course and direction in city affairs over the next six month will have the first impact on the parliament and presidential election next year,” said Shin Yul, politics professor at Myongji University.

Progressives can gain political momentum if Park succeeds, added Lee. But if he fails to meet expectations, people will turn their back on those with similar views.

“Park may be a barometer of the new politics in Korea as to whether the progressives and civil society can do well in politics,” said Shin.