Over the past four decades, the Korea Culture and Information Service has grown into an organization with 24 overseas offices, promoting the nation’s culture and image all over the world.

In time with its 40th anniversary on Dec. 31, the state-run organization will hold a seminar aimed at “seeking new answers” on how to conduct its activities more effectively.

KOCIS was inaugurated as the Overseas Information Center under the Culture Ministry in 1971.

When it first opened, its main purpose was mostly carrying out propaganda as there was a need for South Korea to effectively promote itself against its northern rival after the Korean War.

Following the democratization movements in the 1980s, the organization began to focus more on cultural promotion activities and it got its current name in 2008.

The role of KOCIS has become more important in recent years as the popularity of Korean pop-culture, also known as hallyu, has been spreading throughout the world. 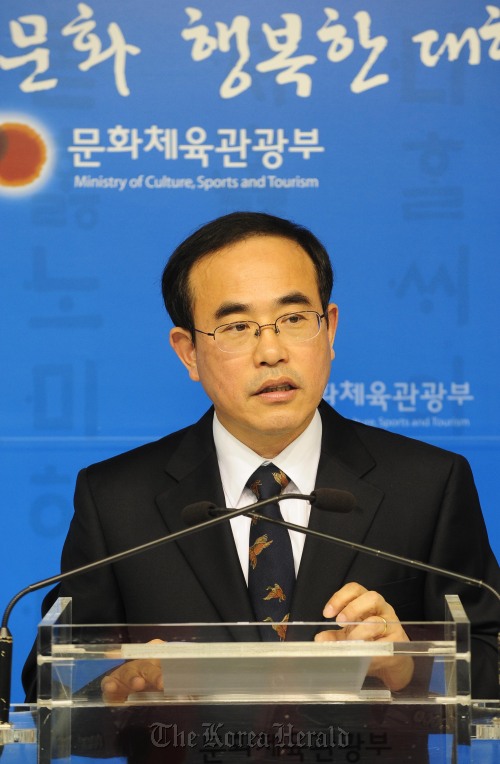 Director of the Korean Culture and Information Service Seo Kang-soo speaks to reporters at a press conference at the Culture Ministry on Tuesday. (The Korea Herald/Park Hae-mook)
With a growing number of people becoming interested in Korea, KOCIS has been increasing the number of cultural centers abroad, which offer visitors with information on Korea as well as Korean language lessons.

During Thursday’s seminar, cultural figures from Korea and abroad will discuss how to improve the organization’s activities.

Culture Minister Choe Kwang-shik, Korea Foundation president Kim Byung-kook and Korea Advertising Society chairman Kim Sang-hoon are among those who will be attending the opening ceremony of the seminar on “Reaching out Constantly, Resounding Globally.”

In session one, Kim Dong-ho, honorary director of Busan International Film Festival, and Cheon Ho-seon, former director of the Korean Cultural Center in New York, will join other experts in sharing their views on the history and the future of Korea’s overseas cultural public relations activities.

In the second session, Choi Sung-joon, the strategic planning director of YG Entertainment, Jung Jae-sook, senior journalist at the JoongAng Ilbo, and professionals from the field, will discuss strategies to keep the Korean Wave going.

Most of session three will be held in English, with Andrew Salmon, correspondent of The Times, Roland Davies, director of British Council in Korea, Donald Kirk, correspondent of CBS Radio News, and Ryoji Ito, chief of NHK, proposing ideas on how to improve Korea’s national image.

KOCIS will also hold a photo exhibition and publish a book chronicling the organization’s 40-year history to commemorate the anniversary.