UNESCO delegates, who are meeting Nov. 22-29 in Bali, Indonesia, gave the green light Monday to taekkyon, jultagi (tightrope walking) and Hansan mosijjagi (ramie fabric weaving). The three were among the six Korean traditions of the 49 submitted from across the world.

UNESCO holds regular meetings to discuss which local traditions should be protected and nurtured for future generations under the list of practices with world cultural importance. Korea now has 14 cultural traditions listed.

Taekkyeon is a traditional Korean martial art in which one uses dance-like movements to strike at an opponent. It is the first martial arts in the world to be listed by UNESCO. 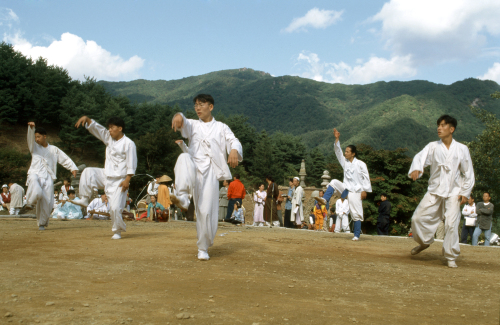 Taekkyeon
Jultagi refers to a form of entertainment which was once widely practice among the traditional clowns and entertainers in Korea, also accompanied by music and sarcastic banter between the tightrope walker and an earthbound clown.

Hansan mosijjagi is a tradition carried on by middle-aged women in the western coastal region ― now called Seocheon ― which boasts fertile land and sea winds that allow ramie plants to thrive.

Weaving ramie cloth involves a number of processes, including harvesting, boiling and bleaching ramie plants, spinning yarn out of ramie fiber and weaving it on a traditional loom. Ramie cloth is comfortable in hot summer weather and is used to produce a variety of clothing from dress suits and military uniforms to garments worn at funerals.

Korea also has the Royal Ancestral Rite and Ritual Music at the Jongmyo Shrine of the Joseon Dynasty (1392-1910), pansori (traditional narrative song) and ganggangsullae (a 5,000-year-old dance with people holding hands and hopping in a large circle) on the UNESCO intangible heritage list.

Representatives of 137 countries, including the 24 UNESCO member states, are attending the meeting in Bali, Indonesia.

During the meeting, the delegates will also reviewed practices that call require “urgent protective measures” to save them from dying out in their current and authentic form.

Nine practices, including Indonesia’s traditional dance Saman, were added to the list.

Korea does not have any traditions on the list.